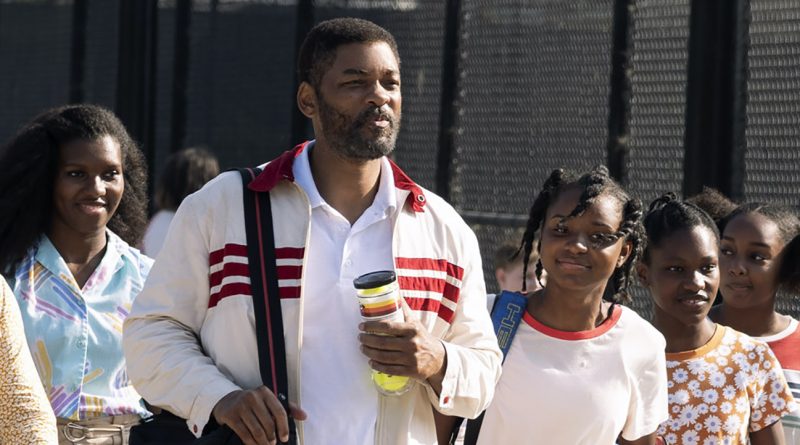 Director Reinaldo Marcus Green’s King Richard focuses on Richard Williams, the single-minded father of the great tennis sisters, Venus and Serena Williams in their early days. Richard guides and perfects their talent through a racist sport where opportunities arrive only because of his unflinching, unflappable determination with support from his wife Oracene.

Richard Williams’ brought much more than the dream of his daughters’ achieving top rankings, that alone unusual for a Black family growing up in Compton where Richard endures beatings. To achieve his dream for Venus and Serena, Richard devoted hours learning to coach tennis, then hours to training in good and awful weather, plus securing top-notch coaching. And Oracene coached Serena as well as being a fully involved mother. They also, always emphasized education, at which both sisters excelled, and they encouraged their five daughters emotionally as well as physically, though Richard had several affairs.

As a bit of a tennis fanatic myself, I’ve seen both women play, and I’ve seen them play each other. I admire their early demands for equal pay for women and their responses with the racism they encountered. I therefore attended this film with trepidation, fearing it would be too ‘Hollywood’ or inauthentic. I’m delighted to report I was completely won over by Will Smith as Richard and the entire cast. Delivering a complex performance, Will Smith expresses Richard’s grit, his insistence that Venus and Serena want to play or they don’t, plus Richard’s ability to size up a situation, knowing when to push and when to take a stand and walk away, alternating subdued with confrontational behavior, especially in response to racist double standards. Saniyya Signey as Venus, Demi Singleton as Serena, and Aunjanue Ellis as Oracene also give superb performances, more than contributing their share. Signey and Singleton are athletic, but some movie magic helps convey the excitement of the matches and practices.

At this year’s Telluride Film Festival, director Green said he was never going to make this film without the family’s approval, and he got it, a well deserved endorsement. Green noted that the Williams’ family left a great legacy, giving hope to their entire community. King Richard tells a thrilling, inspirational story.