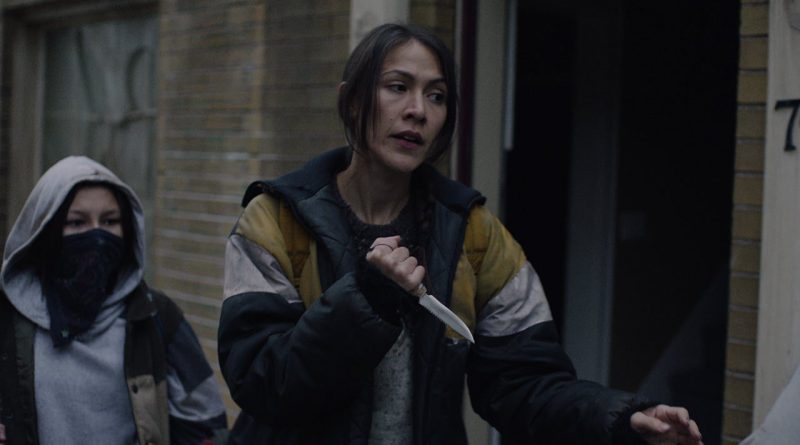 With recent headlines reminding us of the horrors of residential schools and forced assimilation of Indigenous children, writer-director Danis Goulet’s dystopian story Night Raiders could just as easily take place now as in its actual setting 20 years in the future.

It is 2043 and North America is a much different place after wars and a military takeover that toppled the government. Citizens are allowed to live freely in the cities while the Indigenous population is forced into hiding, mostly in the woods, away from the watchful eyes of soldiers and drones. Children under the age of 18 are taken to the academy, a literal representation of Canada’s and the US’s dark history with similar compulsory education programs. Parents are promised they will be reunited with their children upon graduation, but it is an empty promise from an authoritarian government that prides itself on the rise of The Jingoes, the group who actively brainwashes and reprograms academy students, teaching them full and complete allegiance to a government built on a system of conformity, single-mindedness, and most important, one language and culture.

Elle-Máijá Tailfeathers keeps the sci fi story tethered to our reality in her role as Niska, a Cree woman who has spent years hiding her now 11-year-old daughter Waseese (Brooklyn Letexier-Hart) from the Jingoes. The early scenes they share paint a picture of a strongly bound mother and daughter, fiercely loyal to one another, staunchly independent, and constantly on the move to keep themselves safe. But both their bond and their independence are shattered after Waseese is injured and needs urgent medical care, initiating a chain of events that lands the girl in the academy and her mother falling in with a group of vigilantes, comprised of Indigenous peoples from around the world.

Danis Goulet’s debut feature is impressive, particularly with how masterfully she uses limited means to deliver a world that feels uncomfortable in its familiarity and unencumbered by extravagant visual effects. There are enough techno gadgets to remind us this is the future, but it is not an inevitable one.

Through early scenes with Niska and Waseese, Goulet gives us everything we need to know about their world without derailing the pace through too much exposition. As things get difficult and the two are separated, Goulet keeps the story grounded in the emotional weight of their circumstances and the toll such a situation would place on a mother burdened with the guilt of giving up her daughter in order to try to save her. Tailfeathers has some beautiful, heart-wrenching moments, never wallowing in her feelings, but giving herself time to feel them. Likewise, Waseese — renamed Elizabeth by the Jingoes — wrestles with the confusion of years on the run and the mixed messages the academy would teach her. In her first film, Letexier-Hart rises to the challenge of the roll.

On one level, Night Raiders is a film that fictionalizes the tragic history of Indigenous people and uses it, not only as a condemnation, but as the basis for story of survival, hope, and a way forward. Looking deeper, the film uses the specific history of atrocities against Indigenous people from around the world to call out the very concept of cultural homogeneity and to vanquish the concept that a world of complete unity of language, ideology, religion, etc, destroys society rather than strengthens it. At a time where “groupthink” and echo chambers are valued, Danis Goulet shows us there are better ways to live and work together.