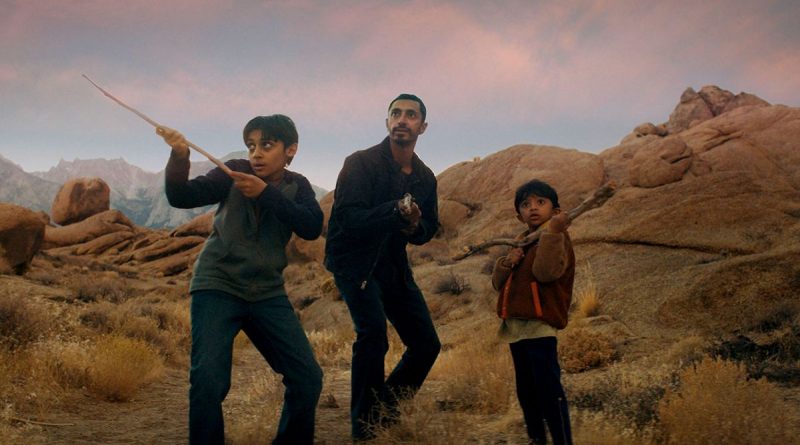 Encounter finds terror in a father’s kidnapping his two sons

In Encounter, the decorated Special Forces Marine combat veteran and father Malik Khan lovingly delights and amuses, then dominates and terrifies his two sons Jay and Bobby after he kidnaps them, certain he’s saving them from aliens. With Riz Ahmed as Malik, through intense physical scenes and a psychological labyrinth, the story moves through hairpin turns and tense confrontations.

Director and co-screenplay writer Michael Pearce proceeds at a breathless pace, submerging us in Malik’s point of view as he watches alien parasites infect unaware individuals. Given our pandemic, the unnerving bodily invasion prompts deep fear, working almost too well at capitalizing on our pervasive anxiety. In that regard, the adolescent son Jay, in particular, segues from delight to questioning confusion to terror. Our adult surrogate is Hattie Hayes, a source of reason and insight, who responds the most accurately to Malik.

The twists and turns keep me from saying more, though the multilayered emotions and interactions advance with clear, compelling flourishes. In fact, Encounter draws on several genres, from science fiction to road movie, chase film to tender family drama, seamlessly blending them. The terrain of the American Southwest and the ghost town (the real Eagle Mountain Mine in Riverside County) enhance the characters’ isolation and desperation. Cinematographer Benjamin Kracun makes the most of deserted landscapes. He also communicates emotions with angles and lens choices, framing Malik in asymmetrical close-ups while shifting to wider shots, more balanced compositions as the family group travels or for those in pursuit. Through these choices, intimate, subjective details contrast with more objective moments.

Riz Ahmed as Malik brings a ferocity alternating with nurturing, fatherly care. Octavia Spencer as Hattie conveys, as always, a complex character, in a standout supporting role. And the two boys, Lucian-River Chauhan as Jay and Aditya Geddada as Bobby are natural and nuanced. I’ve wondered often lately where these impressive child actors come from. Encounter is at cinemas from December 3 and begins streaming on Amazon Prime Video from December 10.