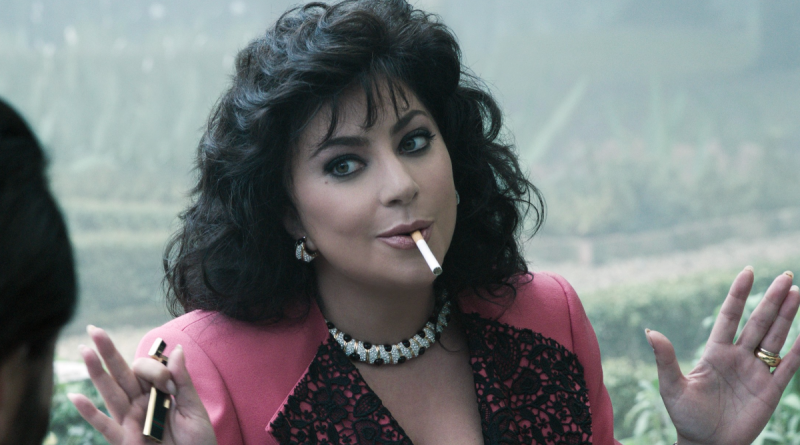 Every bit as plastique and fabulous as a knock-off designer handbag, House of Gucci is a wildly entertaining soap opera about people fighting over money, from director Ridley Scott.

Fueled by a performance from Lady Gaga that suggests she maybe hijacked this production the same way Patricia Reggiani hijacked the Gucci family, the film is riveting to experience despite performances that go full ham hock and Italian accents that drift and blow away like so many autumn leaves.

The entire conceit — American and British actors pretending to be Italian by speaking in sort-of-Italian-inflected-English — is ludicrous; let us never speak of this again.

The House of Gucci is like The Godfather as directed by Douglas Sirk.

The film is stuffed with spectacular fashion and music and intrigue and emoting and true crime, so there’s never a dull moment.

(The Guccis are real people; it perhaps should be said that this is commentary on a movie and not on anyone’s real life.)

The Gucci name belongs to a family saga about a leather-goods empire created by a former bell-hop, a rags to riches tale we enter just around the riches part, with all the right ingredients (sex/family/power) for potboiler action and intrigue.

Milan, 1978: Patrizia Reggiani (Lady Gaga) is a clever and beautiful young woman working for her father’s trucking business. She meets Maurizio Gucci (Adam Driver), soft-spoken heir to the fashion house, at a fancy party; she aggressively pursues him.

Maurizio is quiet and not particularly ambitious, but Patrizia is a firecracker. She has money but no education, and he and she are worlds apart, socially speaking. That class divide is what sets off Maurizio’s father, Rodolfo Gucci (Jeremy Irons), who warns his son not to get involved too deeply with Patrizia.

But Maurizio and Patrizia marry, even though it means Maurizio is cut off from any Gucci support. No matter. Maurizio’s uncle, Aldo Gucci (Al Pacino) is the businessman in the family and he sees Patrizia’s ambition as a good thing.

There are various other people floating around: Uncle Aldo’s useless son, Paulo (Jared Leto), Patricia’s psychic (Salma Hayek) and the family lawyer (Jack Huston), to name a few; they all play a role in the power dynamics that begin in earnest after the death of Maurizio’s father.

What follows are intrigue and tax evasion and masses of money, and Patrizia, who is really the brains of the operation, pits Maurizio against the rest of his family for control of the company. She wins.

The marriage ends and everything else goes south, too. Hard to believe there’s anyone left who doesn’t know how the story ends, but let’s just say it ends badly.

The House of Gucci is based on a real-life story of greed and betrayal and tragedy, but in the telling here it is busy and beautiful to look at.

There are a couple of leaps in the storytelling that don’t quite add up and a complaint might be lodged about some of the more melodramatic bits — but it’s all so visually dazzling and fun to watch that none of these quibbles add up to much.

The Jared-Leto-silly-son subplot could have been cut in half. Or more. Just saying.

The Gucci story is little more than an illustration of the old shirtsleeves-to-shirtsleeves-in-three-generations maxim, but it’s fascinating to watch the lavish lifestyles of Gen Three dovetail with the conspicuous consumption of the 1980s — a brand-new concept for a world pre-internet, social media or influencers.

As for performances, it’s hard to imagine anyone other than Lady Gaga in the role of Patrizia; she is suitably alive, aggressive and ambitious in the role. She owns this thing.

That she and an inveterate chewer of scenery like Al Pacino can actually appear in scenes together and nobody spontaneously combusts is probably a miracle.

Patrizia Gucci herself has said that she and Maurizio were a beautiful couple who had a beautiful life; that is captured here.

Their adult daughters inherited their father’s Gucci fortune but are now estranged from their mother.

That’s too bad, as Patrizia had a big role in creating that fortune, and some would say she had a role in preserving it, too. They probably wouldn’t say that out loud though.