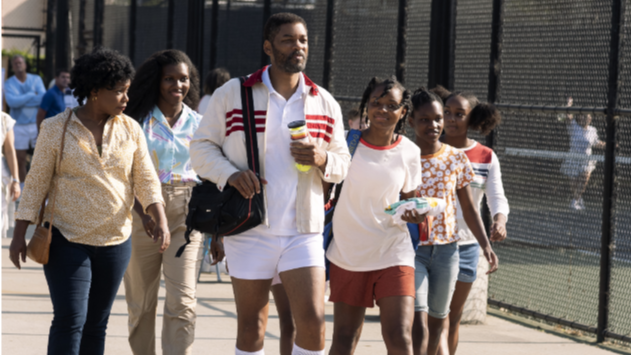 Will Smith has been nominated twice for Oscars. Now his persuasive performance as King Richard should earn him a third nod and, perhaps, first win. Smith plays stubborn, outspoken Richard Williams, the demanding yet loving father of tennis stars Venus and Serena Williams.

Set in Compton, California, Richard’s story begins as he gathers discarded tennis balls at various local country clubs, storing them in his van. Every day, he drives his young girls to the cracked inner-city public courts, relentlessly drilling them on their strokes before reporting for work as a security guard.

Frequently beaten up by menacing gangs, Richard tries to shield his family from the drive-by shootings that were a daily reality. When he gets unduly frustrated by the girls’ lack of focus, he’s kept in line by his no-nonsense wife Oracene Price (Aunjanue Ellis), who agrees that it’s imperative that the teenagers become well-educated, well-rounded people instead of spoiled, single-minded tennis brats.

Relentlessly finding and firing one coach after another, Richard Williams is a man with a plan – a manifesto – to make Venus (Saniyya Sidney) and Serena (Demi Singleton) into world champions. Yet the closer the girls come to achieving their goals, the more irrational and paranoid Richard becomes.

“You gonna be the greatest of all time,” Richard tells the girls. “You know how I know? Because I planned for it.”

Working from Zach Baylin’s script, director Reinaldo Marcus Green deliberately concentrates on tenacious Richard, moving Venus and Serena to the background, although they went on to win 30 Grand Slam Singles titles between them, plus 14 Doubles titles together.

In a letter to critics, Venus and Serena, credited as executive producers, wrote: “We wanted to make sure that our story was not only told the right way, but that it highlighted the critical role Black fathers play in a family…Will does a fantastic job as our dad – it’s genius.”

On the Granger Gauge of 1 to 10, King Richard aces a sentimental, inspirational 7 – in theaters and streaming on HBO Max.