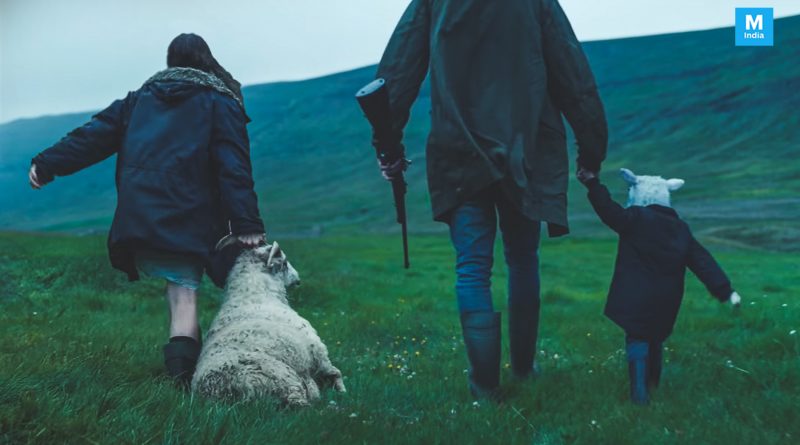 High on my list of Best International (Foreign) Films of 2021 is Iceland’s Lamb,”a contemporary folkloric tale from Norse mythology.

When a pregnant ewe inexplicably delivers a strange lamb/human hybrid, astonished Maria eagerly swaddles the mysterious creature and Ingvar builds a crib so it can sleep in their bedroom. Lovingly bottle-fed, it’s named Ada. As Ada grows, they protectively treat her as the sweet child they never had.

Then Ingvar’s malevolent brother Petur (Bjorn Hlynur Haraldsson) unexpectedly arrives from Reykjavik. He’s horrified when he discovers what Ada is, but then he too comes to accept her as part of the family. Inevitably, of course, there’s a price to be paid for defying the will of nature.

Winner of the prize for Originality at the Cannes Film Festival, it’s written by celebrated Icelandic poet/novelist Sjon and visual effects artist Valdimar Johannson, who makes an auspicious directing debut, slowly creating a subtle, yet haunting atmosphere of quiet dread – leading to a jaw-dropping payoff.

This is the highest-grossing film in the history of Icelandic cinema, earning more than a million dollars in its first weekend alone, even when pitted against Daniel Craig’s final James Bond adventure.

If Noomi Rapace looks familiar, she’s a Swedish actress best known as Lisbeth Salander in The Girl With the Dragon Tattoo. Since she spent her childhood in Iceland, she speaks Icelandic fluently.

And the plaintively bleating ewe that gave birth to Ada is tagged with the number 3115, which matches Jeremiah 31:15: “A voice is heard in Ramah, lamentation and bitter weeping. Rachel is weeping for her children; she refuses to be comforted for her children, because they are no more.”

In Icelandic with English subtitles, on the Granger Gauge of 1 to 10, Lamb is an intriguing, enigmatic 8 – streaming on Prime Video, Apple TV and Vudu.