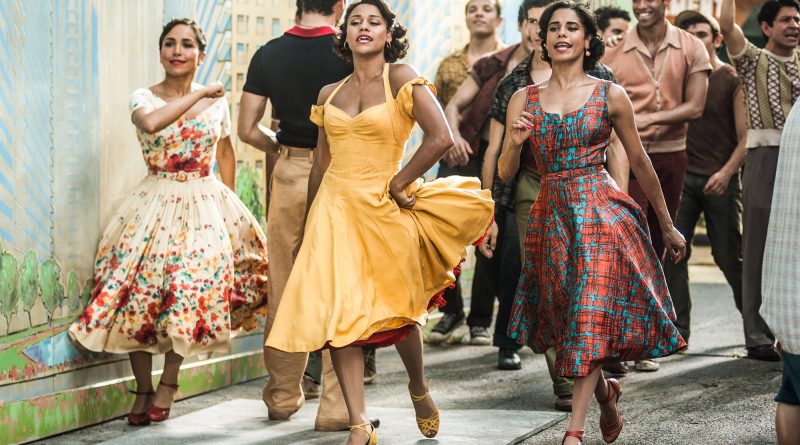 West Side Story gives a contemporary update to the iconic story

Director Steven Spielberg makes so many good choices for his remake of the iconic West Side Story. First, he respects the legendary, celebrated songs, showcasing their presentation through remarkable singing and dancing. Second, Spielberg infuses the 1957 story with serious contemporary issues, notably and always at the heart of the story, ethnic racism, plus rape, gang violence, and gentrification.

The film grabs us in the first seconds, announcing itself with that familiar whistle, thereby reminding us of and calling us to embrace this delightful musical signature. We’re immediately, solidly in the New York of the Jets and the Sharks. Then the roving camera notices the sign “Slum Clearance” as it moves past a depiction of the new, upscale apartment buildings to come at Broadway and 68th Street. A camera drone flies over several tenements being demolished with brick and concrete rubble piled high, before focusing on a wrecking ball. Doors open upward from the street, thrusting out one of the Jets, and we’re made aware that this iteration will have a conscience. For starters, this time all the Puerto Ricans are Latinx.

Tony Kushner’s screenplay keeps the essential conflicts and characters, along with new flourishes interweaving the personal with the political. One reimagined character is the druggist Doc, now his widow played by the marvelous Rita Moreno. All the gang members, the women, and the supporting players showcase their spectacular talent, the dances choreographed by Justin Peck especially magnificent.

It’s 1957 in the Upper West Side neighborhoods of Lincoln Square and San Juan Hill being demolished, bureaucratic decisions thereby intensifying territorial clashes, while making way for the Lincoln Center for the Performing Arts and Fordham University, among other upscale institutions. Not for the first or last time, poor neighborhoods were razed for “progress.”

In press notes, Spielberg states that he believes “great stories should be told over and over again, in part to reflect different perspectives and moments in time . . . with contemporary values.” He adds that this story is culturally significant with a central premise – that love transcends prejudice and intolerance, that love must confront and overcome hate. He has admirably achieved his goal. West Side Story screens at cinemas only per Spielberg’s request.