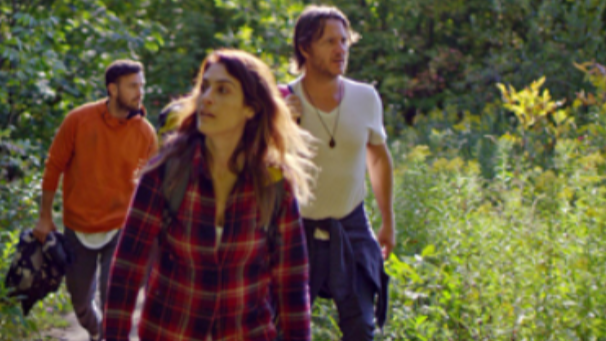 The indie feature The Wishing Tree stirs inevitable comparisons to Wild, the 2014 adaptation of Cheryl Strayed’s memoir starring Reese Witherspoon. In both, a woman hikes into nature to deal with her grief and find a measure of purpose and peace.

Yet where the latter film crafted an aura of introspection and solitude, The Wishing Tree feels more crowded, almost busy. Part of that is because of the shorter distance involved—about a weekend in the woods instead of Wild’s roughly thousand miles on the Pacific Coast Trail—but also the convenience of having characters pop up along the way just when the protagonist needs them.

Julia (Laura Adamo, A Kiss and a Promise) certainly navigates emotional terrain familiar to any lost soul who wants to get away from it all and find answers lacking in other parts of her life. After yet another miscarriage and the death of her mother (Brigitte Robinson, Awake), she sets out in search of the Wishing Tree, a tree she’d visit as a child, in a desperate bid for a more hopeful, happier life.

Making her feature debut as a director and producer, Adamo frames Julia in wide shots against the stirring views of Northern Ontario hiking trails. Julia might not seem like a spiritual person in flashbacks; she tells her husband (Jake Michaels, Star Trek: Discovery) how she feels broken and empty. But in the quiet moments where she follows a map from an old journal or takes in the gorgeous vistas around her, Adamo crafts a space for Julia that feels nurturing and patient.

The Wishing Tree hits some bumps on the trail, though, in introducing Caleb (Sebastien Roberts, Northern Rescue) and Ryan (Altair Vincent, Blink Twice), a recovering alcoholic and a newly married restauranteur, respectively. These buddies have their own baggage, which bubbles up after they become lost and run across Julia, who coincidentally went to high school with Caleb.

Julia has more supplies for a wilderness adventure than these two, one reason why Caleb wants to spend more time with her. He remembers how he and Julia kissed years ago at a New Order concert, a lingering attraction that Ryan observes is trading one escape for another.

Although Julia is determined to go her own way, the men decide to make sure she’s all right once rain rolls in, then offer to help her find the tree when it’s not where her childhood map said it would be. What follows is a journey of discovery with shades of 2001’s Y tu mamá también, including some fireside intimacy that feels more abrupt than earned.

Nevertheless, the script by Adamo, Dominic Auld, and Stephen Chambers has some touching moments, thanks to the tender chemistry between Adamo and Vincent. Even though Julia and Caleb have some history together, Ryan too knows how it feels to be lost, describing it as wandering around inside his head in the dark, and seems to sense when to give Julia space to heal.

The Wishing Tree never raises the idea that the tree is a figurative place, and it drops yet another character into the woods in the third act to lend Julia a helpful hand. While Julia’s self-discovery is relatable, one wishes she’d explored her thoughts and insecurities more deeply, or encountered a little more magic.