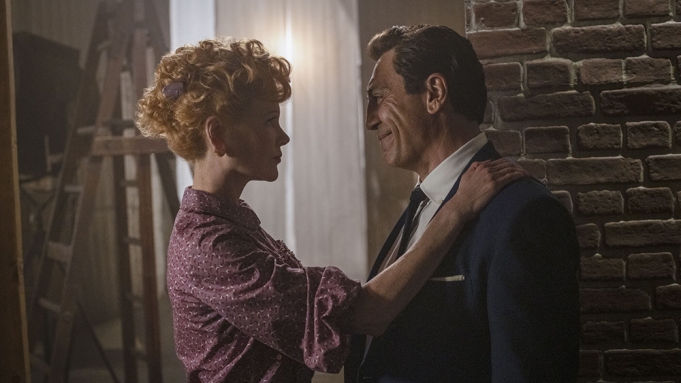 Being the Ricardos proves especially hard to watch for any one of 60 million viewers who saved Monday evenings for I Love Lucy. We know what those actors looked like in those roles; we know the plots. Heck, even folks who have watched the iconic television situation comedy in re-runs know.

Unfortunately, this look behind the scenes in 1960 is terribly uneven. As writer, Aaron Sorkin was wise to pick a week in the lives of Lucille Ball and Desi Arnaz, who played the Ricardos in I Love Lucy, that holds drama itself. The week begins with radio gossip Walter Winchell claiming that Ball is a Communist. The episode being written, rehearsed, and produced that week has Lucy throwing a dinner to reconnect her sparring friends, the Mertzes. In addition, that’s the week the stars announce a pregnancy to the network, CBS, and the sponsors, Philip Morris, and when Ball finally reckons with Arnaz’ sexual profligacy.

Sorkin has to juggle all those plot balls. He added another layer by having the show’s writers and producers remember that week in retrospect. Whereas Sorkin managed beautifully in last year’s The Trial of the Chicago 7, he does not manage this millefeuille of a plot. That is partly because Sorkin always has to have at center an unheralded genius — his alter-ego. Here, it’s Lucille Ball.

Unfortunately, Nicole Kidman at 54 plays the 39-year-old comic. In occasional flashes, Kidman succeeds, but not enough to carry Being the Ricardos. Javier Bardem does better with Ricky than with Desi. However the supporting cast is exemplary, especially J.K. Simmons as William Frawley, Alia Shawkat as young writer Madelyn Pugh and Linda Lavin as older Pugh, and Tony Hale as producer Jess Oppenheimer.

Production values at all levels of time and space work well. Note those giant amber ashtrays on the writers’ desk. And there are the iconic Priscilla curtains in the Ricardos’ apartment.

As director, Sorkin succeeds in switching from behind the scenes to the black and white show on television to the colored film on the silver screen. Crowded scenes of Arnaz baba-loo-ing on his drum at Ciro’s work. What also works is the look at television’s history, especially the power of sponsors and of the Standards and Practices bureau.

Being the Ricardos covers a lot of uneven territory but never quite gets its footing.