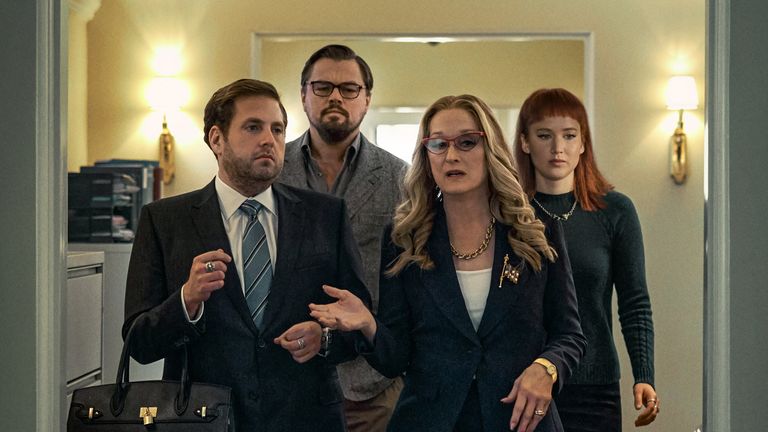 In Greek mythology, Cassandra was cursed. Yes, she could predict the future, but, no, she was not believed. As a consequence, Troy fell, and she was captured and killed. Surely, Adam McKay had Cassandra in mind when he wrote Don’t Look Up, “based on truly possible events.”

The title is ironic. The idea is to look up. Up there, a comet is coming this way, and it will destroy the Earth and its denizens. That’s the prediction of two astronomers, Dr. Randall Mindy and his colleague, Kate Dibiasky, still earning her doctorate (an academic point made clear in every introduction). They are Spartans at Michigan State University. Read: low-level. Read: Midwest. Which is why the President herself decrees: “Let’s get some Ivy Leaguers in here.”

Dr. Randy (the name is, of course, suggestive) is played by Leonardo di Caprio, who trades his leading-man looks for a dad-bod. Almost-doctor Katie is enveloped by Jennifer Lawrence. Carl Sagan is played by a figurine.

After Dibiasky discovers the planet-killing comet, aimed for a direct hit on the earth in six months and 14 days, Dr. Mindy heads out to alert the press, the folks at home, and the ships at sea. “Don’t Look Up” is one long presser with two scientists trying to convince the government and the media that lives are in danger.

The government is represented by President Janie Orlean, played by Meryl Streep, her hair a synecdoche of curls and her manner shadowing Julia Louis-Dreyfus’ Veep. The President’s snotty son is played by Jonah Hill, a graduate of Sychophancy 101. The media are represented brilliantly by Cate Blanchett, her eye-make-up courtesy of Ringling Brothers, and Tyler Perry as a co-anchor who understands the art of the idiot interruption on air.

The cast is appreciably enhanced by the work of award-winning actor Mark Rylance as a visionary who talks funny.

Mckay, who also directed Vice and The Big Short, ranged his cameras from answers to rhetorical questions placed as if the Silver Screen were a lap-top screen to a gorgeous drone shot of the earth at sunset. His writing is sharp, including the ironic valediction, “I wish you a very pleasant end of times.” However, McKay needed more than the usual reins, for Don’t Look Up is too long. So take a nap. But wake up for the coda in the credits.