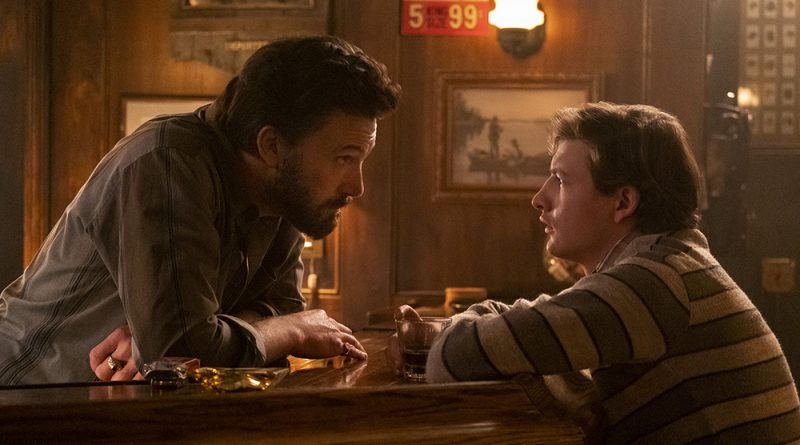 The Tender Bar watches as mentors support and guide J.R.

Director George Clooney has a refined touch, by which I mean that without understatement and restraint The Tender Bar could have easily tipped over into sentimental mush, which it doesn’t. Instead, it presents a snapshot of 1970s and 80s working class individuals inhabiting Manhasset, Long Island and New Haven, and the communities they share.

Based on J.R. Moehringer’s 2005 memoir of that title, the story focuses on J.R. at two decisive stages of life: as an impressionable boy and a student at Yale. With a largely absent, alcoholic father, J.R. lacks a male role model. Fortunately, his mother nurtures him beautifully and his Uncle Charlie steps up, offering support and wise advice. Since Charlie owns the Dickens Bar in Manhasset, Long Island, this means nine-year-old J.R. spends a lot of time there, learning from his uncle’s intelligent counsel and observing ill-advised behavior by some of the pub regulars. As the title of the pub suggests, Charlie likes to read and encourages J.R.’s ambition to become a writer.

Early scenes progress a bit awkwardly as Clooney cuts back and forth between J.R.’s boyhood and his travel to and first days at Yale. Straight chronology would work better. Nevertheless, the through line of J.R.’s family gives the story a solid grounding. The Tender Bar doesn’t deliver the adrenaline rush of superhero action films. It is better for its heartfelt message of family support and intimacy settles in and lasts. Within its ordinary, daily events, friends and family exhibit kindness, and J.R. must cope with emotional difficulties. For example, everyone doesn’t return J.R.’s love, notably, his father and his college infatuation Sidney. But his taciturn grandfather comes through in an unexpected way, and his mother is always there. Never strident or sentimental, the film captures life in all its messy details.

As Uncle Charlie, Ben Affleck gives an appealing, relaxed performance with Daniel Ranieri as the young J.R. and Tye Sheridan as the college-age one complementing Affleck’s laid-back approach. Christopher Lloyd as the grandfather exhibits the presence that comes with years of experience. Much younger, as J.R.’s mother, Lily Rabe steals every scene she’s in with her graceful awareness of what J.R. needs and how to deliver it. A welcome, enjoyable film for this time of year, The Tender Bar screens at area cinemas from December 22 and streams on Amazon Prime Video beginning January 7.