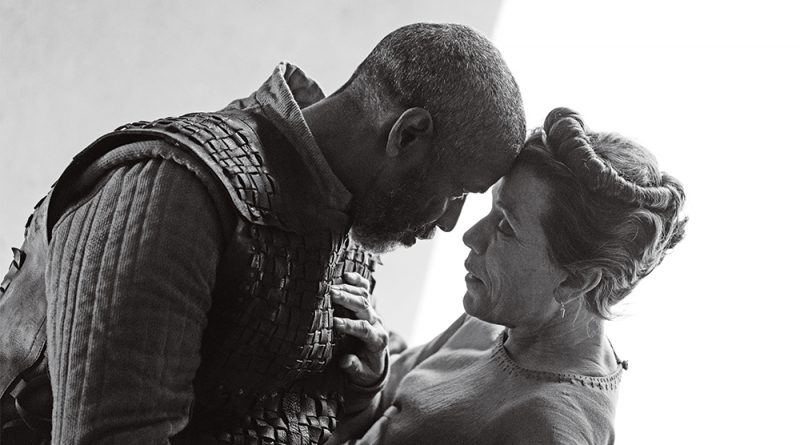 The Tragedy of Macbeth offers a gripping, contemporary interpretation

A new presentation of a familiar, well-known film or play requires a reason for its existence. So when I learned Joel Coen, of the Coen brothers, wrote the screenplay for and directed a new version of Shakespeare’s Macbeth, I wondered why, what he had to add to the many previous presentations just on film, going back to the silent era.

I’m delighted to report that he has breathed new life into the Scottish play in The Tragedy of Macbeth. Of course we know the story of the ambitious, heinous Lord Macbeth who kills to be kind and of Lady Macbeth’s encouragement, all in the service of their own demons and ultimate defeat, so surprising to them. Birnham Wood will come to Dunsinane and “none of woman born/Shall harm Macbeth,” but that does not include Macduff “untimely ripped from his mother’s womb.”

This, the three witches, the dissembling and traitorous villainy are all there, packaged in Stefan Dechant’s surreal, architectural marvel of gargantuan spaces dwarfing everyone; high walls and cold, massive rooms; gravity defying stairs: all sculpted with cinematographer Bruno Delbonnel’s evocative lighting and shadows. Technically, Coen’s film has a rapturous, disorienting design, impossible in a theater and with full advantage taken of cinematic possibilities. The Coen brothers’ usual musical genius, Carter Burwell, adds his nerve-jangling music and sound, especially of note in the witches’ scenes.

In addition, Denzel Washington as Lord Macbeth and Frances McDormand as Lady Macbeth make the words sing with all the desire and fear perfectly expressed in their rhythmic pronouncements. Clearly and terrifyingly, they convey their egotistical lust for power and the delusional path they follow. Minor characters add the poetic texture and intricate complexity Shakespeare always includes, with Corey Hawkins as Macduff, Brendan Gleeson as King Duncan, and, huge credit here, Kathryn Hunter as the witches. Their animated portrayal as screeching ravens gives them a nerve-jangling immediacy that defines the mood in their and subsequent scenes. The Tragedy of Macbeth is an inspired, modern interpretation that invites many contemporary associations. It screens at cinemas beginning December 25 and streams on Apple TV+ beginning January 14.