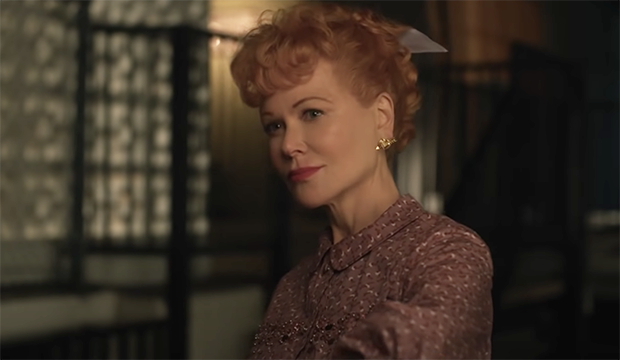 Growing up in Hollywood with a director/producer father (S. Sylvan Simon) who often worked with Lucille Ball, I had the pleasure of knowing her…which was why I was absolutely stunned that Nicole Kidman was not only able to embody her exuberant physicality but also to capture the vocal nuances and tonal essence of the determined woman she was.

During the stressful week that this behind-the-scenes story takes place, Lucille Ball (Kidman) and Desi Arnaz (Javier Bardem) are threatened by shocking personal revelations, a political smear, and CBS’s concern over cultural taboos as they’re preparing a pivotal installment of I Love Lucy.

Set in 1953 when Sen. Joe McCarthy terrorizes Hollywood with his Communist witch hunts. Lucy & Desi are into the second season of their groundbreaking sitcom when, unexpectedly, on his Sunday night radio broadcast, powerful columnist Walter Winchell suggests that Lucille Ball is a Communist.

“I’m not funny,” Lucy often claimed. But she was brave, and she certainly knew how to play funny.

Married for 20 turbulent years, America’s favorite redhead and her philandering Cuban band-leader were far more fascinating than the fictional Ricardos, as Sorkin delves into the darker aspects of their lives. As years went by, their commitment to I Love Lucy was the only thing keeping them together.

Many claim the last kiss they ever shared was the last kiss of the last episode of their last show. Shortly afterward, Lucy filed for divorce and bought out Desi’s shares of Desilu Productions. As studio executive, Lucy later launched hits like Star Trek and Mission Impossible.

Admittedly, this film is minor Sorkin but Aaron Sorkin (West Wing, The Social Network) is cagey, droll and voraciously smart.

On the Granger Movie Gauge of 1 to 10, Being the Ricardos is an intriguing 8 – in theaters and streaming on Amazon Prime, starting December 21.