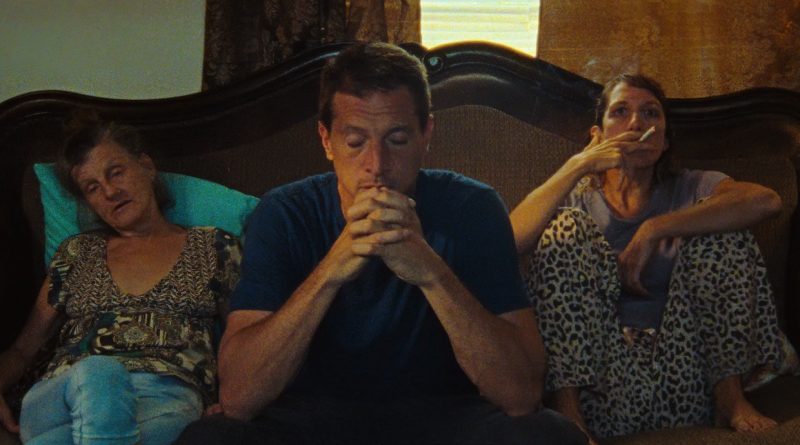 In Red Rocket writer/director Sean Baker dares us to spend two hours in a world few would want to inhabit. For this film is a clear-eyed, straightforward immersion in the confrontational, deceitful behavior of the main character Mikey Saber whose murky past gets revealed directly and indirectly through conversations.

Not that Mikey can hide much as he wheels and deals his way into his estranged wife’s and her mother’s home, lying nonstop to manipulate everyone in his orbit, including neighbors. With his motor mouth, this Los Angeles ex-porn star is on the run from events in his past, now creating new problems with what he assumes is his charm and savvy business knowledge. As the hyperactive Mikey, Simon Rex propels the action even as his world spins out of control.

And that world gets increasingly complicated as Mikey gets involved with drug dealers. More repulsively, it becomes downright creepy as Mikey woos and seduces seventeen-year-old Strawberry who works at the local donut shop. Mikey promises Strawberry a great future in the sex industry in which he worked. In a press interview for the Telluride Film Festival, Baker said sex work is “seen by some people as an expression of economic freedom and empowerment. . . by others as patriarchal exploitation.” To be accurate, Baker had consultants from the adult film world and sex workers, but if he’s any gauge, it looks downright exploitive.

Set in Texas City in real locations just before the 2016 election, director Baker uses professional and first-time actors and allows improvisation to generate a spontaneous, documentary feel. It works. And Drew Daniels’ grainy 16-millimeter cinematography gives the locations a tactile presence, open spaces contrasting with a dingy, claustrophobic interior at wife Lexi’s home. Escape finds Mikey riding his bike here and there, racing breathlessly and a bit frantically to his next mark.

Sean Baker, who directed the underrated The Florida Project, Starlet, and Tangerine, nonjudgmentally captures what he calls “the underground economy.” We might call it living by survivalist tactics, and whoever gets hurt, that’s life. How viewers feel about Red Rocket will depend on their ability to tolerate Mikey, a narcissistic, egotistical hustler, who feels he’s in control, until he isn’t.