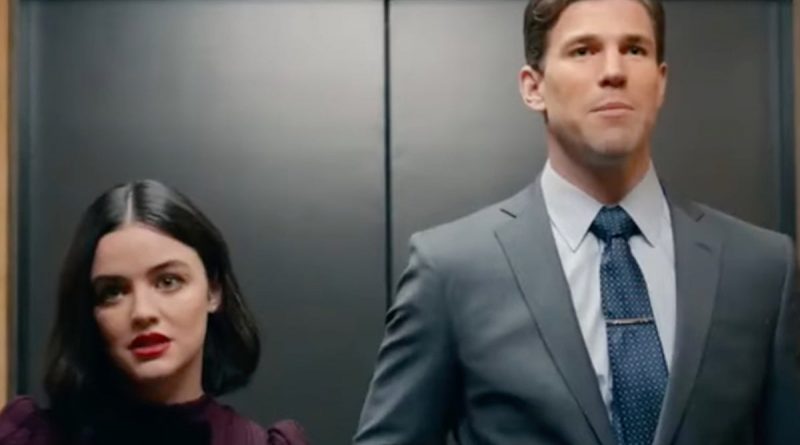 Love and hate are a fine line apart in The Hating Game as the film’s sexy leads, Lucy and Josh, are seething adversaries until they inch closer in each other’s orbit and chemistry takes the reins.

The two are creations of best-selling author Sally Thorne, whose fun 2016 romance novel adapted by Christina Mengert for director Peter Hutchings’ film is based, and the actors who he cast exude the right combination to suspend disbelief as these unlikely lovers fall hard for each other, not without a few twists and turns of course.

There’s an unlikely arch-villain in this holiday rom-com of opposites attract. The iconic TV star Corbin Bernsen, making a welcome appearance as Boss #2 Bexley in a company of chalk and cheese interests. Bernsen plays a caricature macho boorish boss and is the “cheese” in this odd merger. His publishing company is the moneymaker and the book world’s lowest common denominator.

Boss #1 is Helen (Sakina Jaffrey), the head of Gamin Publishing. Helen is a new-age intellectual with great taste in a crass world that dines on 90 Day Fiance as the main course.

The two face each other in an administrative duel, as the quirks of one get under the skin of the other and vice versa. But come on, we are talking about two insanely attractive people who realize they want to have the other, regardless of their competing for similar vocational interests.

It’s a sexy build-up, and Harvard MBA packin’ Josh is the more restrained of the two, as we come to find out the heaviness of his familial baggage, with a drop-dead gorgeous doctor brother, a disapproving doctor father. Not being good enough for dear old dad and suffering a humiliating love loss has given Josh an icy edge, one that his office nemesis Lucy Hutton seems to be adept at melting away.

Crossed wires, miscommunication, and overzealous attempts to hook up nearly blow up a good thing, but dammit, this time of year, we want nice things, and the filmmakers deliver it. There are no spoilers or book report play-by-plays here, but it’s a bit of a wee wild ride to get from A to Z in this romantic yarn of complete opposites crashing into each other like orbiting asteroids.

Take note, ye filmmakers; there was the right amount of veiled sexy sex scenes—no nudity—and more carnal content than the diluted love tripe that Hallmark and Lifetime serve up in similar projects.

You Tinsletown purveyors of fancy froth, kissy mistletoe, and jingle bells can do this, make a sexy rom-com and holiday film in one if you are smart and carve up a believable tale with the proper dialogue and the best cast actors to bring it all to life.

The Hating Game shows that casting, writing, and lensing and all the below-the-line crafts well done can create the perfect escapist holiday-centric romantic, sexy yarn that anyone with a pulse would love.

The Hating Game will be in theaters and VOD Friday, December 10.