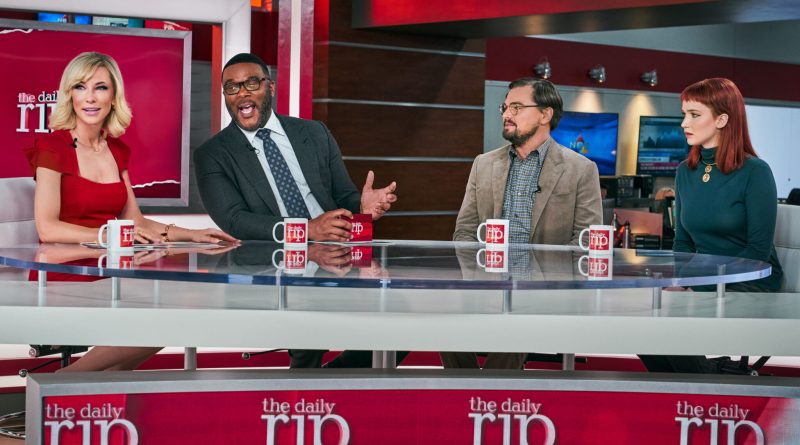 It begins at Michigan State University as astronomy grad student Kate Dibiasky (Jennifer Lawrence) spots a never-before-seen comet. Calculating its trajectory, it seems to be headed directly toward Earth.

Terrified, she alerts her advisor, geeky Dr. Randall Mindy (Leonardo DiCaprio), who confirms that that the comet will, undoubtedly, destroy Earth in six months. After wading through bureaucracy, they snag an appointment to alert the President, but they’re kept waiting for hours outside the Oval Office.

When they finally inform President Orlean (Meryl Streep) of the imminent extinction of the human race, she’s far more concerned about midterm polling numbers, as is her snotty Chief of Staff/son (Jonah Hill). Her initial denial parallels that of President Donald Trump when first confronted with Covid-19 evidence.

Rather than “sit tight and access,” which is what the Administration advises, Kate and Randall turn to the media, snagging a spot on a popular TV Morning Show where the relentlessly perky hosts (Cate Blanchett, Tyler Perry) are determined to trivialize their message: “Keep it light, fun.”

Eventually, condescending President Orlean relies on an aloof mega-donor, Peter Isherwell (Mark Rylance) – think Elon Musk/Steve Jobs. So there’s no surprise when this prescient billionaire decides to mine the comet for its precious resources.

With Doomsday imminent, the POTUS glibly advises, “Don’t Look Up,” as a pop star (Ariana Grande) counters with “Just Look Up!” Plus, there are dubious bonus scenes during the end credits.

Previously, filmmaker Adam McKay created politically-charged satires (The Big Short, Vice,) with far more substance than this flimsy, disjointed venture, conceived as an allegory for the current climate crisis. That must be why environmental activists Leonardo DiCaprio and Meryl Streep climbed aboard, perhaps hoping for another Dr. Strangelove or Wag the Dog. No such luck!

On the Granger Gauge of 1 to 10, Don’t Look Up is a frantic, fragmented, ham-fisted 5, currently in theaters and debuting on Netflix on December 24, Christmas Eve.