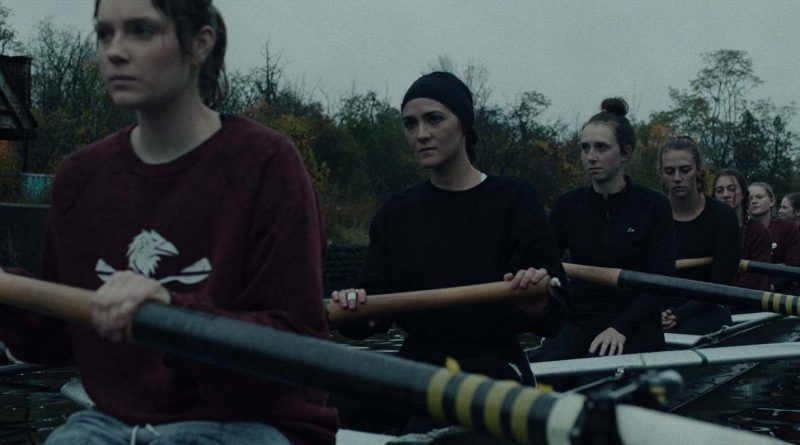 Lauren Hadaway’s gripping debut, The Novice, is a master class of innocuous descent into a slight madness. Elements of the films Personal Best, Black Swan, Vision Quest, and Rocky collide in a cool palette, cold and wet, as sport and obsession take a small girl, usually underestimated, and unleashes the fierce beast that drives her every calculated move.

The mantra, “Legs, body arms, arms body, legs,” of the rower who means business occupies real estate in Alex’s (Isabelle Fuhrman) brain. She dives headfirst into the elite level and introduction to the sport of collegiate rowing, where she falls like a domino, lured by her need to be the best to the point of OCD levels of dedication. Her inner monologue is repetitive row lingo, the rhythm of punishing early AM frigid workouts and practice routines.

Unquestionably, Alex is intense. In her studies and the physical effort of rowing and being on top. As we watch The Novice, we come to believe that besting others is Alex’s driving inspiration, with her off-the-charts competitive levels. Calling her an overachiever is simplistic; she burns inside. But then her motivations become muddy. What does she want? Who does she want?

The act of being a first-year collegiate rower unleashes a feral beast and unlocks her true desires that lean to the female side of camaraderie, leadership, and lust. That is until she oversteps her bounds and pisses off nearly everyone, her coach and teammates. This exertion she masters is a red herring. Rowing is not her real love.

The Novice is no lofty “sports as a personal savior” film. Quite the opposite. Sports and all the positives that come with team building feel like a perverted sub-story to Alex’s inner furnace burning away, trying to prove herself to herself, over and again. However, the film plays out genuinely as Hadaway’s life experiences as a collegiate rower show in the veracity of the action.

Fuhrman is fully immersed as Alex, disturbingly so at times. Nevertheless, her performance is frighteningly good as an outlier on a crew that grows to view her with borderline animosity for her singular approach and pure dedication to pushing the boundaries of the sport, teammates be damned.

Alex excels at pushing her uncomfortable limits. She won’t relax, she doesn’t know when to quit, and her relentless pursuit of being the best coupled with self-harm eventually pushes her lover out of her orbit.

The Novice is a perfect film to understand how vital sound scoring is to the visual medium of film. It is important to note that the sound arts, editing, scoring, and composition, are usually the categories people ho-hum and overlook or excuse themselves when watching an award ceremony for film and television. This lack of respect for the sound arts has always driven me crazy. What would Twin Peaks have been without its eerie soundtrack?

Hadaway’s score by composer Alex Weston and music supervisor Andy Ross takes you there on every sensory level a drives home each frame perfectly lensed by DP Todd Martin. The score, as mentioned above, and the soundtrack is perfectly twined to Alex’s inner thoughts and obsessive note-taking; This is all a part of why The Novice takes what would be a “go-girl” sports film and propels it to an edgy, psyche-noir thriller.

The Novice is one of the best and most original films screened this year for me, and it reveals that Ms. Hadaway—who also wrote and edited (coeditor was Nathan Nugent) the film— was born to do this for art and commerce. This film is her debut, meaning we can look forward to a great deal more from her. And lucky us, the audience.