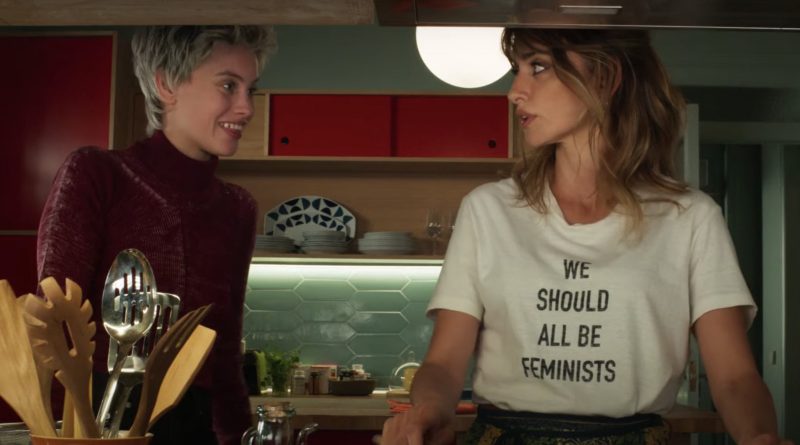 Pedro Almodovar is no stranger to telling compelling stories about complex women, from Women on the Verge of a Nervous Breakdown to All About My Mother to Volver and more. His streak continues with Parallel Mothers, an emotional drama about connection, coincidence, and the ties that bind us. Penelope Cruz and Milena Smit star as two women whose lives are irrevocably entwined after they give birth in the same hospital on the same day. Janis (Cruz) is a successful Spanish photographer whose quest to confirm the location of her great-grandfather’s body (he was killed in the Spanish Civil War) leads to a passionate affair with Arturo (Israel Elejalde) — and an unexpected but welcome pregnancy. While she’s in labor, she meets the much younger Ana (Smit), who’s much less excited about the prospect of impending single motherhood — and whose own mother, Teresa (Aitana Sánchez-Gijón), hasn’t exactly been a model parent. Janis and Ana both welcome daughters and then go their separate ways, though Janis tells Ana she’s welcome to reach out anytime.

But after Janis discovers something unthinkable, she cuts ties with anyone connected to her baby; it’s a rash, instinctive act of self-preservation that works until she once again crosses paths with Ana and realizes the full measure of the secret she’s been trying to forget. The two women gravitate toward each other, finding comfort and support in the connection they share, though it may not be able to withstand the truth Janis is hiding. Meanwhile, Janis continues to pursue her goal of exhuming the mass grave where her great-grandfather lies — another truth that can no longer be denied.

Cruz and Smit both deliver excellent performances under Almodovar’s confident, compassionate direction. Cruz has never been more assured, even when Janis is plagued by indecision, and Smit is achingly vulnerable as a young woman who’s been craving unconditional love and support for most of her life but doesn’t have much luck finding it until fate brings Janis into her life. The relationship between the two women isn’t an easy one, but it’s one that proves essential to both of them, and the way they negotiate it makes for one of Almodovar’s most satisfying movies to date. — Betsy Bozdech

Pam Grady:Pedro Almodovar reunites with muse and frequent collaborator Penelope Cruz as he explores yet another facet of one of his frequent subjects, motherhood, in this intriguing, sometimes moving drama. Middle-aged photographer Janis (Cruz) embraces single parenthood when she becomes pregnant and tries to pass that enthusiasm along to teenage Ana (Milena Smit) when the two meet in the hospital maternity ward. That first encounter marks the beginning of an important relationship for both women, though one that will be tested by fate and lies. Set in the here and now but against the background of the Spanish civil war – Janis lobbies for the opening of a mass grave said to contain her great-grandfather’s remains – the film marries the personal with the political. At its center is the disparate kinship between these disparate women, and in Cruz and Smith’s beautifully modulated performances is a testament to motherhood, the power of female friendship, and the bonds of family – the ones we are born with and the ones we invent.

Marilyn Ferdinand Spanish director Pedro Almodóvar seemingly finds motherhood and queer life inexhaustible as subjects, as he uncorks another example of both in perhaps the most melodramatic film of his later years, Parallel Mothers. Almodóvar regular Penélope Cruz and newcomer Milena Smit play, respectively, a single photographer pushing 40 and an unmarried teenager from a dysfunctional home who meet in a maternity hospital and give birth at the same time—only to have their babies accidentally switched. The older woman discovers the error, but before she can correct the mix-up, complications ensue. Parallel Mothers has the air of a 1940s women’s film, with its rich protagonists and its designer clothes, fine art, and baby-centered plot. However, Almodóvar bookends his weepy with a search to uncover the disappeared from the Spanish Civil War. This thread of the story seems meant to undercut the frivolous affluence of the main action, but functions mainly to emphasize the importance Almodóvar places on family identity and connection.

Leslie Combemale One of many great choices Almodóvar makes in his psychological thriller Parallel Mothers, which is unabashedly political on both an individual and societal level, is the Hitchcockian music. It leaves the audience guessing how the story will unfold, and follows the building tension. Just when you think what you’ve suspected from the beginning is true, the film surprises by going somewhere else. The plot about Janis and Ana is set against a story thread about Janis’s great grandfather, whom she believes is laying in an unmarked mass grave site after he was murdered during the White Terror. Those elements leverage the power of familial lineage, and consider the connection through blood and through love in a way that gives a deeper and heartbreaking context to the film.

Nell Minow: Penélope Cruz gives an exquisite performance in Parallel Mothers. Along with the deepening and grounding theme of literally buried history, Cruz’s naturalism grounds Pedro Almodóvar’s tendency toward purplish melodrama to make this is most affecting film.

Sherin Nicole Pedro Almodóvar creates fractured fairy tales about out-of-the-ordinary people, usually women, whose lives go askew in very familiar, although improbable, ways. This is a gift. One that finds us uncannily compelled with each film Almodóvar makes, especially those starring his muse Penélope Cruz. Parallel Mothers pairs Cruz with Milena Smit for a tale of two women who become irrevocably tangled in a twist of fate, defying right or wrong in exchange for delicately tragic.

Susan Wloszczyna: Motherhood is central to the plot but there is so much more, including suspenseful Hitchcockian overtones and a dollop of high-end soap opera. But Almodovar also tosses in a political theme this time when Peneolpe Cruz’s 40-ish professional photographer Janis is assigned to shoot a hunky forensic anthropologist. She reaches out to him to see if he can exhume the remains of some relatives who were forced to dig their own graves by fascist murderers during the Spanish Civil War. It’s a rare time that this auteur has brought politics into one of his twisty cinematic equations as the present and past collide.

Jennifer Merin Parallel Mothers, Pedro Almodovar’s latest drama. is an intriguing tale of two pregnant women who meet by chance and bond, and give birth at the same time. Penelope Cruz and Milena Smit star as the parallel moms whose circumstances and parenting veer off in different directions. leading them to most challenging changes in their relationship. Almodovar is a maestro of femme-centric films with complex situational stories and highly nuanced female character. His skills hit a new height in Parallel Mothers.

Liz Whittemore Pedro Almodovar has an innate ability to write nuanced female characters. There’s always a sincere complexity to the women in his films, and Parallel Mothers is no exception. One of Almodovar’s apparent muses, Penelope Cruz, is nothing short of breathtaking. Janis is on a mission to preserve the complicated history of her family. When faced with the unimaginable, Cruz dazzles with her vulnerability. The audience is locked into the narrative. The other mother in question is Ana, played by Milena Smit. Her sincere innocence is the perfect foil for Cruz and the rest of the cast. Boasting twists and turns, Parallel Mothers is ceaselessly enthralling.

Cate Marquis Pedro Almodovar’s latest suspenseful drama, Parallel Mothers, tells parallel stories on more than one level. One story is about two expectant mothers, one older (Penelope Cruz) and the other younger (Milena Smit), who meet and bond in the hospital while giving birth. The other story is about the first woman’s search for answers about family members lost during the fascist Franco regime, a devastating legacy that still echoes in and divides Spain, but which unites several characters in various ways in this film. That story brackets the one about the mothers, yet Almodovar weaves them together into a tale of healing and hope. Fans have long noted that Almodovar’s films often fall into one of two categories, soapy or serious, but here the director brilliantly brings both of his own parallels together, in a moving drama with winning performances by stars Penelope Cruz and Milena Smit.