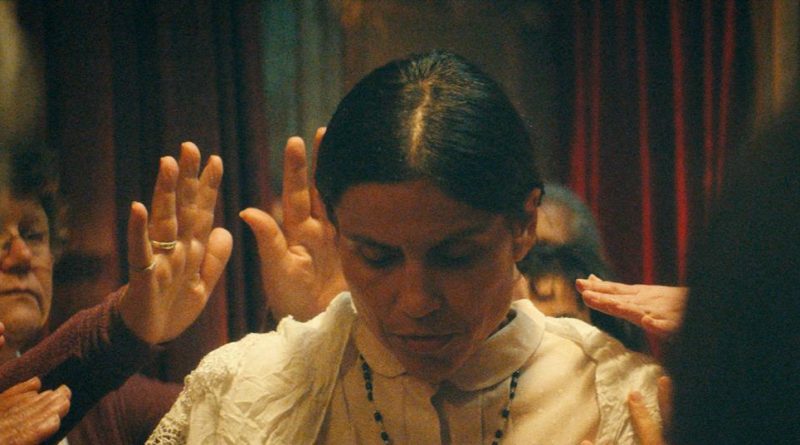 So much of what shapes the narrative and tone of Clara Sola is unspoken. Writer/director Nathalie Álvarez Mesén’s first feature balances the story between protagonist Clara (dancer Wendy Chinchilla Araya, in her acting debut) and nature itself, which exists as almost as another character. The cast moves through the story like choreographed dancers in an often wordless landscape, while the camera catches the movements of trees and animals, the rush of water, and the score beats the rhythms of the earth. Clara Sola, Costa Rica’s official Oscars submission, is a meditation on the inherent mysticism of the natural world, while still considering the creative and destructive aspects of human constructs like religion, and the misogyny it fosters. The film doesn’t always articulate its messages clearly, and that may be intentional by Álvarez Mesén. After all, no time like the present pandemic to be reminded that life as a human is often a confusing mess, and nature can be both a heartless bitch and the open, giving heart of god at once.

Clara is a watchful, sensitive, largely silent 40-year-old woman living what feels like deep in the forests of Costa Rica with her mother and niece. She gives the gift of healing to members of her village and beyond. Whether this gift is given freely, or is expected by her repressive, overbearing, religious mother is unclear but unlikely. Clara is a woman that exists as extension of her natural world, and her ability to heal is a byproduct of her connection to the elements. It is also, one might argue, a byproduct of her passion and lack of shame in all things, but especially in her sexuality. She understands the callings of her body are rooted in the elements and the natural world that lives both inside and outside herself.

There is a struggle between who she is, which she is very clear about, and who the humans around her believe her to be. She has yet to speak her truth to those shuttling her between healing sessions and prayer meetings where she is dressed up as a representation of Mary, Mother of God. But Clara is one of a women of nature who has expressed the triple goddess, virgin, mother, and crone, since the day she was born. Those archetypes are deeply rooted in the mysticism of the natural world. To think of her power as being in the service of a man-made religion is limiting, just as it is for every woman born into monotheistic society. It’s no wonder Clara strains against those limitations.

Meeting her niece’s boyfriend awakes a burgeoning sexuality in her that her mother has stunted and condemned. Clara sees no difference between communicating with the horse or the beetle living with them, swimming in nearby water, feeling the wind in her face, and masturbating. Why should she? Of course, female sexuality is not explored or embraced in a world where the mother of god is celebrated for being a virgin, neither is female autonomy in general. No wonder it leads to more and more feral moments for Clara. Only ‘Clara sola’, only when Clara is alone, surrounded by nature and the elements, can she feel joy, comfort, safety, and a sense of belonging.

It seems Alvarez Mesén and her co-screenwriter Maria Camila Arias aim to articulate the challenge of women living in a society that prioritizes god above man, man above woman, and mankind above nature, all through Clara. They were lucky to find Wendy Chinchilla Araya to collaborate in that articulation. It is a lot of responsibility to put on someone for their first acting role, yet she brings an elemental ferocity and tenderness to the character. Chinchillla Araya shows us Clara’s internal dance, in her fearful interactions with humans and her fearless interactions with animals. Her connection to the elements is always in evidence. She is not just of nature, but is nature. In that way, both the character and the film as a whole are a powerful expression of the divine feminine.