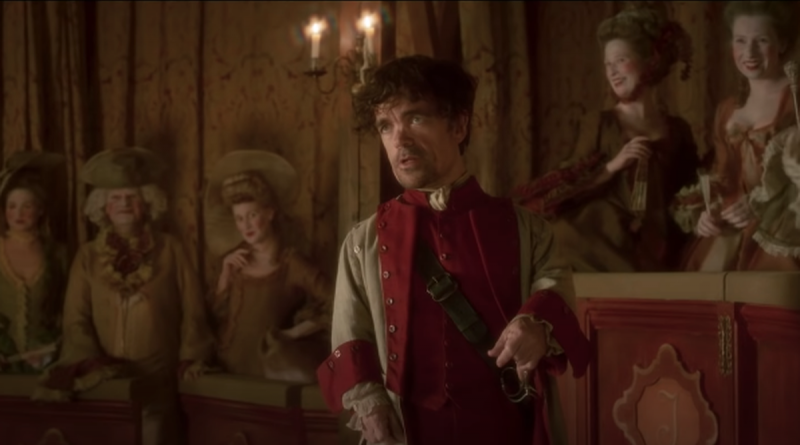 Cyrano charms and surprises with songs, dances, and duels

Familiarity with Edmond Rostand’s legendary 1897 story may help viewers immerse themselves in this version, but the acting and action, the lavish art direction and superb staging (shot in Noto, Sicily) make this adaptation a triumph. As always, this unusual Cyrano exhibits exceptional skill in his exquisite poetry and expert swordplay. However, he also exhibits profound, paralyzing insecurity over any allure he might possess for his beloved Roxane. And so he expresses his passion through his intermediary Christian, an inarticulate soldier.

The clever screenplay, written by Dinklage’s wife Erica Schmidt, brings Peter’s 2019 off-Broadway performance to the screen. The casting of Kelvin Harrison Jr., a Black man, as Christian makes a positive statement on color-blind casting. An enchanting Roxanne, Haley Bennett brings a lightness of spirit and movement and a lovely voice. In fact, a distinctive immediacy is achieved since all the actors sang live with no lip-synching. Yet another striking difference between this and earlier versions, here the actor for Cyrano will not take off his prosthetic that differentiates him, i.e., in all previous films, his large nose. Cyrano’s height will remain a distinguishing characteristic on and off screen, an important detail to consider, Dinklage noted.

This year’s Telluride Film Festival presented a tribute to Peter Dinklage. Commenting on his years of celebrated accomplishments, he cited Steven Soderbergh’s maxim that Perseverance plus Talent equals Luck as his guiding principle, adding that success takes a lot of hard work. Dinklage added that through “Cyrano” he hoped to offer beauty without irony to a cynical world, and Cyrano succeeds. Not often a fan of musicals, I was delighted by this lively, inventive version, at area cinemas.