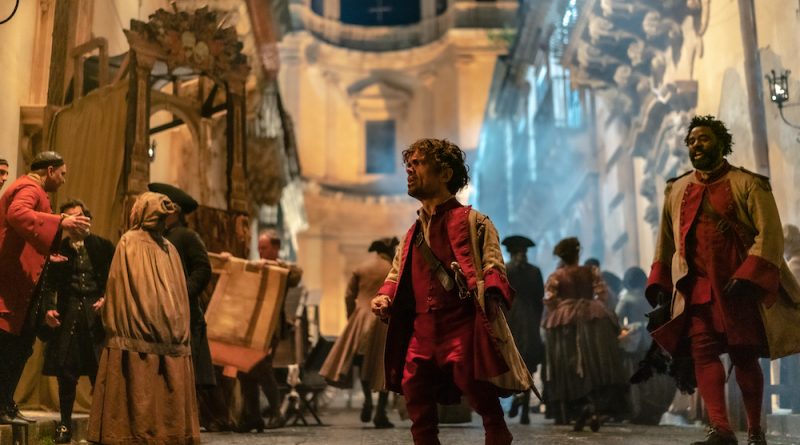 Sometimes a film takes a second viewing to make you aware of how much it moves you. If you have a rather cynical view of romance, perhaps, “Cyrano” (2021) won’t be your cup of tea. Or you might find yourself humming one of the tunes from the soundtrack days later and realize this very romantic film has worked itself through your thorny defenses despite yourself. I confess I am in the latter camp.

Any high school English major is familiar with the story of the musketeer with the soul of a poet but the less than ideally proportioned visage who was created by playwright Edmond Rostand in 1897. Based on a real man who was indeed a poet and author, “Cyrano de Bergerac” has been adapted for stage and screen countless times worldwide. The latest version by director Joe Wright has been adapted for the formidable talents of Peter Dinklage by none other than his wife, screenwriter Erica Schmidt. This alone is an incredibly romantic story but “Cyrano” boasts yet another amorous partnership in the character of Roxanne, played by Haley Bennett who is Wright’s love interest.

It is no wonder then that “Cyrano” is charming and seductive, especially with its art direction. The costumes are gloriously over the top, especially the wigs and high heels of the theatergoing noblemen. Roxanne is dazzling in her full gowns and piled high curls, leaving no doubt that men would move heaven and earth for her hand. But at its center is Dinklage as the heartbreaking Cyrano, so clever and quick-witted as well as deadly with a sword. There is a wonderful scene where Cyrano is disappointed to find he must defend himself against only maybe ten or twenty men when he was hoping to fight one hundred, single-handedly. Continue reading.