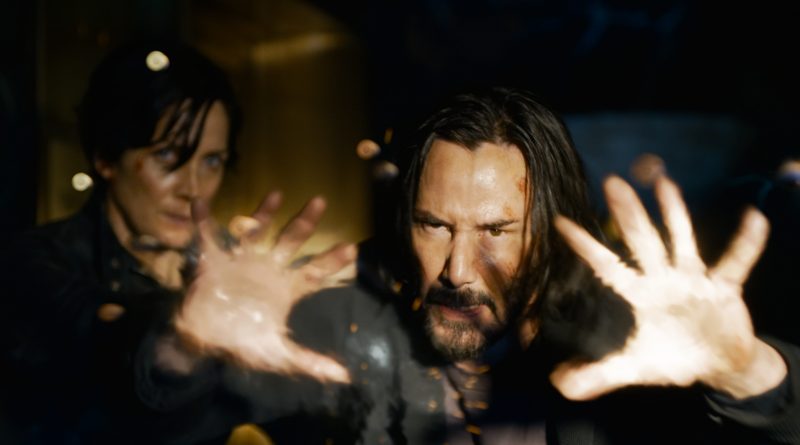 Sometimes the wise decision is to let a film, groundbreaking for its time, linger fondly in our memories rather than to revisit the concept a fourth time. I’m sorry to say that’s the problem with The Matrix Resurrections, the fourth installment in the Matrix world. In its original 1999 introduction, conflicts and connections felt fresh, clever, and exciting.

Here, eighteen years after The Matrix Revolutions, the innovative jolt has diminished considerably, especially as archival footage invokes better moments. For while Keanu Reeves reprises his central role as Neo/Thomas A. Anderson along with Carrie-Ann Moss as Trinity/Tiffany, other beloved characters—Morpheus, Smith, and Sati—have new actors in the iconic roles. While all display strong camera presence, disappointment lingers even as some additions shine, notably the blue-haired gunslinger Bugs (Jessica Henwick), The Analyst (Neil Patrick Harris, always formidable), and, as Smith, Jonathan Groff because of his sense of humor. And there are comic moments in dialogue delivery and some exaggerated actions.

The dramatic continuation after twenty-years finds Thomas A. Anderson, the original identity of Neo, more or less satisfied with his San Francisco world, though still in and out of his simulated computer-generated world but lacking any memory of it. A therapist helps, treating Anderson’s nightmare visions with those famous blue pills. It’s no spoiler to say that familiar battles will ensue, interjected about every fifteen minutes as if the ideas can’t carry this two and a half hour film.

For me, had the trajectory pursued the more imaginative concepts—feeling trapped in a loop (haven’t we all this past two years?) with trouble discerning reality from fiction—the illusory immersion would have been intellectually as well as emotionally more satisfying. I’m thinking of the meetings between Anderson and Tiffany, neither aware of Neo and Trinity’s history, until Morpheus and others intervene. But the issues get suppressed too quickly in favor of combat, presented with very loud music and sound effects. Like Neo, co-writer/director Lana Washowski has been lured back to the franchise. I would have been more satisfied to leave it alone. At area cinemas but best in IMAX.