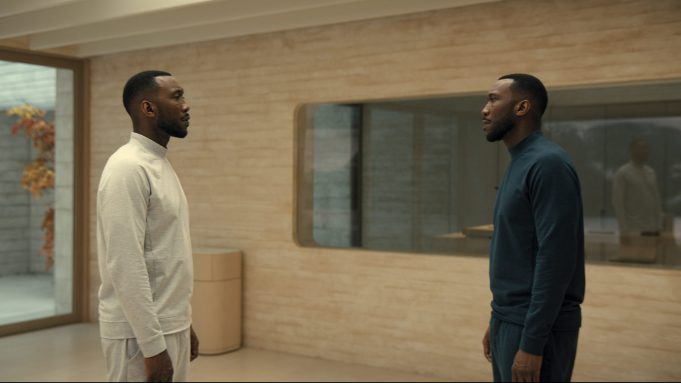 In Swan Song, Cameron Turner (Mahershala Ali) is dying of cancer, but rather than reveal his diagnosis to his wife, Poppy (Naomie Harris), and son, Cory (Dax Rey), Cameron opts to undergo an experimental new treatment to clone himself and let the replicant continue living his life. During the final stages of the treatment under the supervision of Dr. Scott (Glenn Close), Cameron has to face the reality of his decision and confront whether he’s ready to say goodbye to his loved ones — and life as he knows it.

Sensitive performances drive this high-concept drama, which aims to inspire deep thoughts about the pros and cons of technological advances and what humans are willing to do for love. Some of the futuristic gadgets in Swan Song don’t feel that unimaginable — like driverless cars, smart contact lenses in place of phones, life-sized video calls, and 3D video games. But other inventions, like the cloning of a person and all of their memories and experiences, aren’t just distant but ethically challenging, too. Ali thoughtfully embodies the moral quandaries at stake in his dual roles as the dying Cameron and his clone, “Jack,” both of whom are conflicted about the journey they’re embarking on.

The film builds a certain amount of suspense in whether Cameron will go quietly and whether Jack is ready for his new job. That tension is stylishly visualized in the movie’s cold colors and sparse settings. Some of the flashbacks to Cameron’s memories look like ad campaigns (and raise the question: do we see ourselves from the outside in our memories?). Ultimately, Swan Song drags in the second half. The story’s focus on the emotional drama feels stretched a bit too thin for a full two hours. But the cast is very watchable, especially the magnetic Ali, Harris as his beloved wife, and Awkwafina as a fellow client with a sense of humor. Alas, the always solid Close is underused as the doctor overseeing the cloning process, and the likable Nyasha Hatendi (Casual) never seems to get enough screen time. Continue reading.

Jennifer discovered a passion for international movies as an escape from her graduate studies in San Francisco, but it wasn’t until she moved to Spain that she realized she could make a career of it. After a stint in the ABC News Madrid Bureau, where -- among other things -- she got to meet the country’s first female bullfighter, she became Screen International's correspondent for Spain and Portugal. She's been writing about the film industry in Europe and Latin America for more than 20 years, most recently for The Hollywood Reporter. She began teaching journalism and film in 2005 and in 2014 launched the newspaper column/website Films from Afar, dedicated to curating and reviewing international movies available for home viewing in the United States. She's been invited to sit on film festival juries across Spain and North Africa, most recently on the Critics’ Jury at the Malaga Film Festival. Her children are being raised between Spain and the United States.