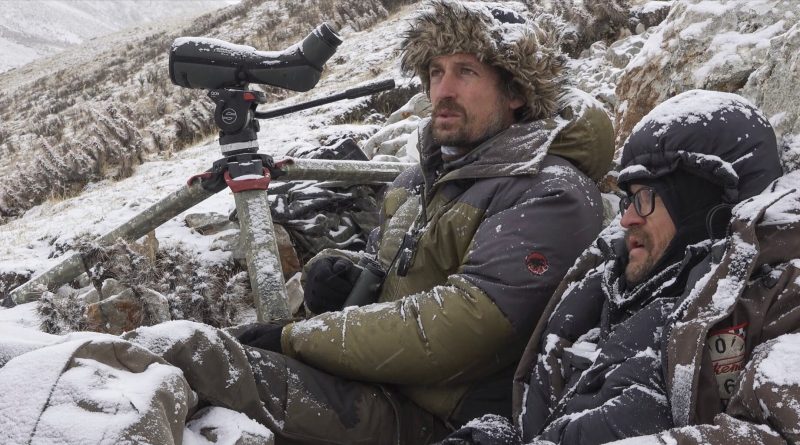 The current state of the world suggests we’d be ill advised to watch a documentary about the loss of yet another majestic animal to extinction. The Velvet Queen, or La Panthère des Neiges, as it’s called in its country of origin, France, is absolutely nothing like that. This documentary is really a celebration of the grandeur and beauty of Tibet and all its creatures, but especially the rare, elusive, beautiful beast, the snow leopard. It makes for joyful and meditative viewing, which for some will be exactly what is needed at this reflective time of the year.

The project is a partnership between writer/directors Marie Amiguet and Vincent Munier, and novelist and adventurer Sylvain Tesson. Renowned nature photographer Munier enlisted Tesson to travel with him though Tibet and share the experience of working to capture one of the holy grails of nature images, that of the rarely-seen or photographed leopard. Amiguet had come to Munier’s attention through her work lensing the documentary La Vallée des Loups, about one man’s three-year odyssey trekking wolves in the French Alps. It was up to Amiguet, in her directorial debut, to film the two men without interaction, and without interfering or guiding conversation.

In terms of humans on this journey, there could be no better central figures than Vincent Munier and Sylvain Tesson. Munier has photographed wildlife all over the world, and is the first to have been awarded the BBC Wildlife Photographer of the Year ‘Erik Hosking Award’ three times in a row. He founded a publishing house to release his own photography books in 2010. He has been perfecting the art of the blind, hiding more or less in plain sight to see and photograph animals in their own habitat, for years. For his part, Tesson rode across Iceland on a motorcycle, across Central Asia on horseback, and walked across the Himalayas on foot. These adventures have led to a series of award-winning books. As Munier explains to Tesson where and how to observe for hours in the inhospitable Tibetan weather, they may keep it to a whisper, but their verbal exchanges, however short, are always deep and philosophical.

It’s usually so much better for there to be no humans represented in a documentary about creatures, but that’s not the case for The Velvet Queen and Munier and Tesson. They have an admiration for all creatures, and an awe, an enthusiasm, and a mutual respect for each other that permeates their time together. It’s inspiring. Probably in part because they’re French, there’s zero shallow chitchat between them. They talk about the decay of modern society, the disregard for nature and life, and the beauty and stillness of the natural world still existing in the few places beyond man. At one point Munier says “I’m not a photojournalist attempting to capture the flaws of nature. It’s a choice, to delve into despair or celebrate beauty.” When Tesson asks if he has dark thoughts after sitting, sometimes for over a day, alone in the wilderness, Munier whispers, “No. Honestly, not at all. It’s when I’m in a big city, that I’m a different man. I feel like I’m playing a role. In nature, you face only yourself. You can’t cheat. That world isn’t my reality. For me, nature is.”

Against a score by Nick Cave and Warren Ellis that is both haunting and in sync with the quiet magnificence of the animals and their expansive Tibetan habitat, The Velvet Queen thrives on the stillness and anticipation so much a part of Munier’s experience as wildlife photographer. With credit to editor Vincent Schmitt, there is a great balance of footage of the Tibetan landscape and the animals that make it their home, and the nature-loving humans wanting to briefly live as part of that landscape and as part of that wildlife.

Do they ever find or record the snow leopard? They may or may not, but that’s not the point of the experience. There is a decided arc to the documentary’s storytelling, and most importantly, there are a number of breathtaking moments in the film that will reward viewers who have a passion for nature and thrill in seeing some of its most elusive creatures.