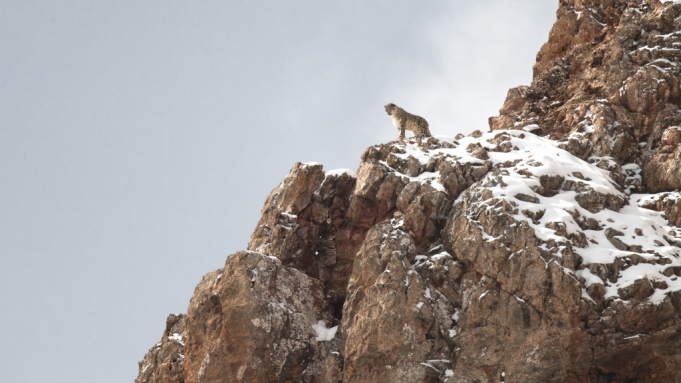 There is plenty of beauty as well as a procession of enchanting wild beasts in Marie Amiguet and Vincent Munier’s nature doc The Velvet Queen, whose majestic title refers to the elusive predatory creature known as a snow leopard. Those in pursuit of this regal cat includes photographer and co-director Munier along with his writer buddy Sylvain Tesson, who published a book about their journey over 5,000 meters up in the air among the chilly terrain of Tibet’s soaring peaks, The Art of Patience – Seeking the Snow Leopard. Sadly, this glorious Asian diva, whose long spotted tail acts like a furry train behind her, has become endangered due to poaching and environmental issues.

As Tesson says at one point, “The earth reeks of humans.”

Given that most of us have hardly ventured out into the world much these days, most viewers will likely appreciate the sights and sounds of snowy gusts, crunchy ice and fresh air. The pair narrates their own journey and it doesn’t take long before they encounter a menagerie of wild life including wolves, antelopes and bharals that sport elegantly curved chunky antlers. Reindeer and wild snorting yaks also wander by while snowy owls are about, as well as rabbits.

In between snapping photos and writing in notebooks, our traipsing companions perhaps philosophize a wee too much about humans and their connection to Mother Nature and forget that a picture tells a thousand words. Uplifting our journey, however, is an elegantly mesmerizing musical score written by Nick Cave and Warren Ellis.

But the main attraction is how you get to see these animals living life in their native habitats and the way they interact and survive, up close and personal. Such images as a falcon whose coloring allows it to blend into the cliff face are mesmerizing. One animal I never heard of before was Pallas’s cat, a chunky feline with unnerving yellow eyes, who we witness trying to get the better of a very large black bird.

Our wanderers also encounter animals of the human kind as well, locals who take the zoo-full of creatures for granted while a cheery young boy finds joy with the two French humans.

The men take some risks by following a mountain passage where there is a cave where a bear has recently inhabited, judging from the feces and paw prints it left behind. Meanwhile, Munier sets up a video camera outside, hoping to perhaps to capture the sight of a snow leopard in the dark of night.

Of course, the two friends accomplish their initial mission. Otherwise, this project would probably never make its way to the big screen. Seeing the object of Munier’s desire brings out the poet in him, as he tells us, “I’ve seen the snow leopard. I’d stolen fire and carried within me the embers.” Much like this serenely intriguing ode to Mother Earth in the raw, the sights and sounds provided by The Velvet Queen sticks with you.