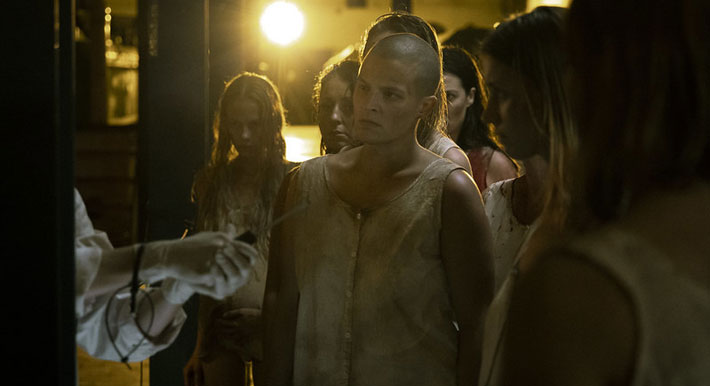 Breeder is a Danish horror/thriller that asks us to examine how far we’ll go to feed into vanity. A ruthless businesswoman (Signe Egholm Olsen) abducts young women in a gruesome bio-hacking experiment to reverse the aging process. But when Mia (Sara Hjort Ditlevsen) goes to investigate, she finds herself trapped, branded, and tortured in an underground medical facility funded by her husband (Anders Heinrichsen).

Breeder, directed by a man (Jens Dahl) and written by a woman (Sissel Dalsgaard Thomsen), presents an interesting female perspective. Is looking young really all that important? Moreover, what do the pressures of wanting a child do to a woman?

Movies in the genre tend to comment on current events, politics, socio-economic problems, and even women’s issues. But Breeder takes multiple women’s issues and exploits them to the max.

Mia wants to start a family. She knows it’s the perfect time to do so, but her husband, Thomas, isn’t on the same page. It’s unclear why — I thought he might be infertile, but the movie focuses on Mia’s wanting to get pregnant — he’s more focused on establishing himself as a wealthy investor working for Dr. Isabel Ruben. The age-reversal expert seems to have cracked the code on maintaining youth in men and is working on a similar treatment for women, and more specifically, herself. In her opinion, aging is the disease that allows other conditions like dementia and cancer to kill us — which makes a lot of sense, but not at the expense of women getting tortured.

In addition to Dr. Ruben’s not-so-medically-sound age reversal process she calls Resurrecta, she’s quite literally breeding babies (see what I did there?) Now, with cages full of captive women being drained of their blood and unwillingly fertilized with what I’ll assume is sperm from Dr. Ruben’s wealthy client list, she’s got a solid gig going. But evil can’t triumph for long.

Dr. Ruben’s practices lend themselves to consideration of multiple women’s issues, especially having control over our bodies. Breeder forces viewers to question how far we will go to cater to our own needs, even if it hurts our allies.

The best part of this movie? Seeing Mia and Thomas come out on top, despite his twisted past with Dr. Ruben.

The worst part of this movie? Having to witness a trash can full of baby corpses.