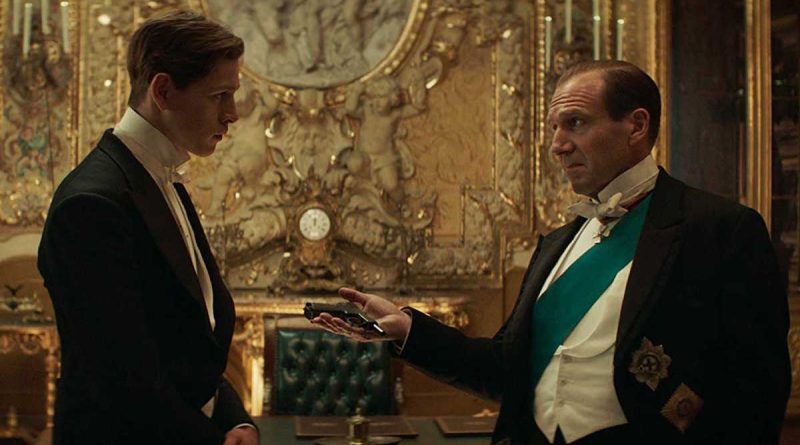 Set during World War I, the irreverent story revolves around Orlando, Duke of Oxford (Ralph Fiennes), who is determined to prevent a nefarious cabal, led by The Shepherd, from annihilating Europe’s ruling class and creating anarchy.

Taking liberties with actual history, he and his patriotic son Conrad (Harris Dickinson) were riding in the carriage of Austria’s Archduke Franz Ferdinand when he’s assassinated by Gavrilo Princip in Sarajevo.

Clues lead Orlando, accompanied by his loyal bodyguard Shola (Djimon Hounsou), to Russia, where he encounters the mad monk Grigori Rasputin (Rhys Ifans), who greets him with “Take your trousers off and sit down,” before licking a battle wound on the aristocrat’s thigh.

Weird – to say the very least – heralding an elaborate dance/fight sequence, set to the 1812 Overture.

As the swashbuckling plot progresses, villainous Rasputin’s legendary resilience is tested…and he’s not even the mysterious mastermind.

Problem is: the tone of Matthew Vaughn & Karl Gajdusek’s convoluted script is inconsistent and, therefore, confusing, bouncing between colonialism and pacifism, as pithy Orlando proclaims, “Nobility never came from chivalry. It came from being tough and ruthless.”

Yet, kudos to them for slyly inserting a super-efficient nanny (Gemma Arterton) who has organized a network of domestic servant-spies. But bickering Colin Firth’s Harry Hart and Taron Egerton’s Eggsy are sorely missed.

FYI: The Kingsman concept can be traced back to Icon Comics, a Marvel imprint.

On the Granger Gauge of 1 to 10, The King’s Man is an absurdly frenzied 5, exclusively in theaters.