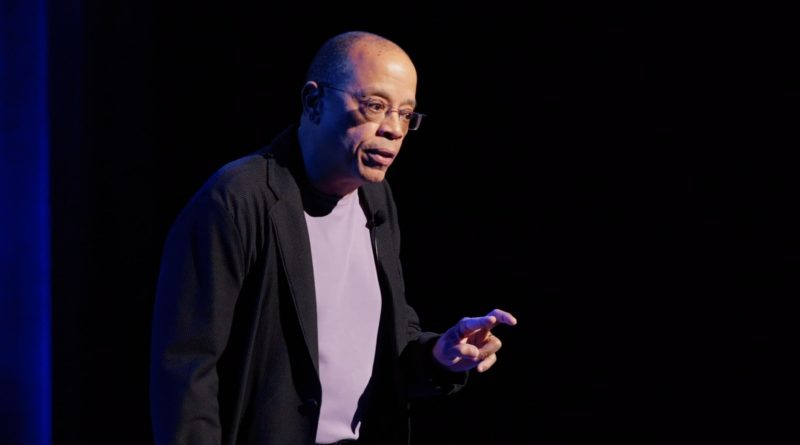 In the documentary Who We Are: A Chronicle of Racism in America, Black attorney Jeffrey Robinson, who has been a lawyer for 40 years, performs as the film’s screenwriter, presenter and star as he delivers a lecture on about how our country continues to push aside our increasing divisions when it comes to our ingrained culture that still embraces white supremacy and institutionalized racism in our society. Here is a man, we are told, who is about to argue his most important case.

Sibling filmmakers Emily Kunstler and Sarah Kunstler, who are white, initially focuses on Robinson, who is the deputy director of the ACLU, as he goes deep into our shameful past when it comes to people of color and civil rights. Over the last 10 years, he has regularly spoke about our nation’s history and the film focuses on his insights but also goes beyond the lectern and reaches out to others in various communities about the law enforcement practices and principles that often block justice for many. As Robinson says, “Ignorance is not bliss, because it allows a false history to thrive.”

Over two hours of running time, the film chronicles such topics as chattel slavery from 1619, its Constitutional preservation, its importance to the economy, its tortuous legal past, the Northern financing, foundations of white supremacy, treason, and its protectors, the 1921 Tulsa Massacre, Nixon’s War on Drugs that targeted people of color as well as the lack of progress when it comes to Civil Rights Movement and Black Lives Matter.

Our Memphis-born lecturer was just 11 years old when Martin Luther King was shot in 1968 at the Lorraine Hotel. Given that Robinson and his father joined one of King’s marches the week before the assassination, the terrible act left a big impression on him.

Robinson also speaks to relatives of Eric Garner, who died on July 17, 2014 at the hands of a New York City police officer who used a prohibited chokehold while arresting Garner on suspicion that he was selling unlicensed cigarettes. He also reaches out to the daughter of Elmore Bolling, who was lynched in 1947 for being “too successful to be a Negro.” He also talks to one of the last survivors of the Tulsa massacre, as well as the sister of Terence Crutcher, who was unarmed with his hands in the air as surveillance cameras caught the deed.

Robinson does take a dig at Trump in a clip tied to his Andrew Jackson fixation when he says that if the seventh president had been a little bit later, “You wouldn’t have had the Civil War. He was a very tough person, but he had big heart, and he was really angry that he saw what was happening in regard to the Civil War. He said, “There’s no reason for this.” Alas, our host notes that Jackson died 16 years before the War Between the States, meaning that he wouldn’t have had any inkling about it. As Robinson says, with tongue firmly in cheek, “There are several things that are problematic there.”

After interviewing others, we get a chance to hear about Robinson’s homecoming as he visits St. Louis Catholic School and his childhood home, which his parents could only buy after a white couple made a bid on the house and bought it for them since the realtor would turn them down. He also reunites with his best friend Opie from 8th grade from way back in 1963, as well as his basketball coach Richard. One time, Robinson and his coach went to a different gym for a game in Wallace, Mississippi, while Richard was told that Robinson couldn’t enter – that is until the pastor arrived and allowed him in. They went back into the gym and they played. But his coach never told him about the incident –until now. Robinson gets very emotional about the revelation and is moved to tears. He shares with the two men that one kid on the other team called him the N-word. He then told his dad what happened and his father asked, “What do want to do?” He replied, “I want to play.” With someone so well-spoken, informed and erudite, Robinson is actually at his best when he shares his own personal insights on how America built its economy on the backs of slaves and continues to undermine people of color.