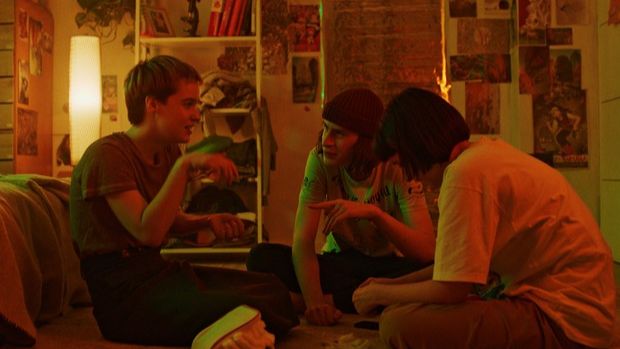 When you’re in your adolescence, every step ypu take on the road to maturity is fraught with emotion and exploration, whether it involves sex, under-age drinking, the use of illegal drugs or flirting with both sexes while defining yourself as a person. In Stop-Zemlia, Ukrainian filmmaker Kateryna Gornostai, known for her documentary work, uses her tools to crack open what it’s like to be Sweet 16 and in high school in this Eastern Europe country. Stop-Zemlia is her first narrative feature film.

While this is a mock-doc, Gornostai did her due diligence by interviewing 200 teenagers who helped to bring a contemporary spirit to both her script and the film’s atmosphere. Their answers provide a key to the way how they see their world. A cast of 25 students was chosen to play high school classmates, but the film focuses on a central trio: introvert Masha (Maria Fedorchenko), who has cropped hair that she sometimes dyes blonde, a thin physique and weariness about what awaits her each day. Her best buddy Yana (Yana Isaienko) makes do with her cute dark brown bob and exudes a more feminine mystique. As for their boy toy Senia (Arsenii Markov), he is mostly going steady with his knitted collection of colorful wool ski hats.

Alas, Masha has a crush on another classmate, Sasha (Oleksandr Ivanov), whose single mother demands an avalanche of attention from the lone man in her life. But it takes some time for Masha to finally make a move to show her feelings to Sasha, who she believes is her secret Instagram texter. Smartphones get an abundance of movie time.

It turns out that teen-agers are much the same as they are in the U.S. of A. They take class trips to museums, they play games – one of which provides the film’s title, which seems like a version of blind tag — and they indulge in drinking too much to the point of barfing, obsess about what others think, they worry about how they look, they despair that they are depressed, they hang out in their bedrooms and do solo dance routines.

One matter that sticks out is that Ukraine high-schoolers apparently can take a rifle shooting class and learn how to break down and reassemble an A-K 47. That’s just the opposite of what happens at U.S. schools, which face the fear of outsiders and insiders who are intent on creating bloody mayhem. Most likely, it is linked to joining the Army since Russia wants to conquer their country in the worst way. Meanwhile, Senia sits out the class because “there was shelling on my street” and the guns provided an emotional trigger for him.

Oddly, it is weird that there are very few laughs to be had in this film. Which means no one would ever confuse this observational hybrid experiment with such much-loved John Hughes movies as Sixteen Candles, The Breakfast Club or Pretty in Pink. At one point, an off-camera interviewer asks about Senia’s female companions. He dryly replies, “It’s fine. It might look like I am an ardent supporter of feminism.” Later, the three amigos end up slicing their wrists with a razor and making a kind of blood pact as they take turns kissing one another.

Maybe the best and most poignant moment on screen arrives when Fedorchenko as deep-thinker Masha asks her interviewer if she feels connected to the emotions that she felt at age 16. The question blurs the lines of acting and reality, especially since Gornostai based her lead character on herself at that age. Anybody who has gone through puberty and the highs and lows of adolescence will definitely relate.