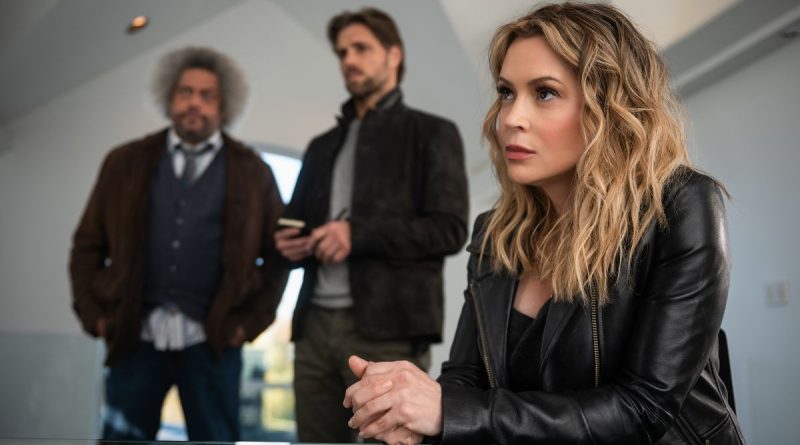 When you turn on a radio station that you always listen to, you get a disorienting feeling if you discover that the station has swapped formats overnight. So it goes with Netflix, home to great true crime-inspired dramas like Unbelievable and Mind Hunter, to find out that they are wading into the Lifetime, Oxygen, or Hallmark Movies & Mysteries pool with films made for audiences who love turgid, dramatic, and soapy true crime takes that have been ripped from news headlines.

Not that there is anything wrong with popcorn ‘Who Shot John’ yarns, but expectations about the new Netflix film Brazen, starring Alyssa Milano as author Grace Miller, must clearly see the film for what it is: a true-crime whodunit-light MOW.

Brazen stars Alyssa Milano as a wildly successful crime genre author whose sister (Kathleen Emilie Ullerup), has ercome a pill problem and has gotten back on track as a teacher. Kathleen is going through hell as she dissolves her marriage to the truly cold-blooded evil asshole Jonathan Breezewood (David Lewis), a character who should have been given more lines and a backstory. Jonathan is trying to get sole custody of their young son.

Kathleen turns to her sister Grace for help in her crisis time of need, indicating that she has the goods on Jonathan, a well-connected lawyer. Milano’s character Grace lectures her about blackmail. “No, no, no. If you had read any of my books, you would know that they are about the exploitation of women, and misogyny and the patriarchy how we do so very little to protect the most vulnerable, so you do you.”

There is terrific chemistry between handsome Ed (Sam Page), the brave detective we are introduced to early on in a failed convenience store robbery-gone-wrong, and his unflappable and naturally witty partner Ben (Malachi Weir). Ed is Kathleen’s neighbor in a lovely, bucolic Cherry blossomed neighborhood as fate would have it. Ben and Ed scenes are fun.

The silver lining to Brazen reveals that these two could have a Bosch-lite-like series written around their crime-solving exploits in DC, perhaps with Grace as their unlikely third partner who stops in between book tours to illuminate the holes in their investigations. Of course, the series could be called, Don’t F*ck With Grace.

But I digress, as Brazen allows grieving Grace to insert herself into her own sister’s murder investigation, and she dispassionately sorts through all the MacGuffins and loose threads until she serves herself up in rubber-suited chest heaving glory to lure the baddie to her sex lair.

And thanks to the writers, you will know precisely who that psycho is at the 37-minute mark. So bring popcorn, suspend any hopes of a gritty mystery and enjoy the over-the-top dialogue.