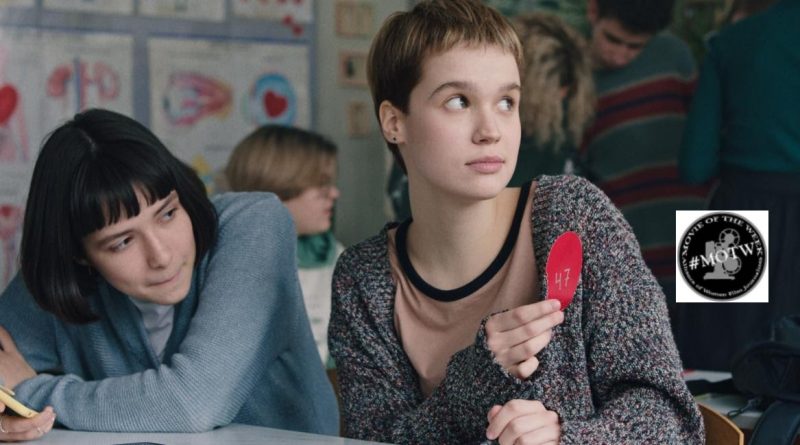 Named after an Eastern European version of the game of tag, the title of Kateryna Gornostai’s raw, naturalistic drama Stop-Zemlia translates to “stop the world” — a fitting phrase for a movie that’s all about the angst and emotional intensity of being a teenager. It’s set in Ukraine, but it could be the story of almost any teen equipped with a smartphone, social media, and the anxiety that comes along with living in the modern world. Gornostai’s experience as a documentarian is clear in the intimate way she films her young cast, following them as they prepare to graduate from secondary school and figure out what comes next. Central characters include Masha (Maria Fedorchenko) and her BFFs Yana (Yana Isaienko) and Senia (Arsenii Markov). The trio navigates the rocky shoals of teen ardor in a way that leaves them achingly vulnerable: While Masha pines after handsome Sasha (Oleksandr Ivanov), Senia is longing for Masha — and Yana yearns for Senia. It may sound like soap opera-style drama, but it’s touchingly authentic. The heart wants what it wants.

These characters, so young and fragile in some ways, are incredibly worldly in others; they matter of factly discuss gender identity and sexual orientation, the climate crisis and the impact of violence and war. They’re realistic about the uncertainty that’s waiting for them as they embark on adulthood, questioning what they’ve been taught to expect about the way that life, including romantic relationships, “should” work. Gornostai’s script, which was largely improvised, has humor, pathos, and, most importantly, the ring of truth.

Like a blend of the heartbreaking 2003 movie Thirteen and the wonderfully frank British teen dramedy series Sex Education, Stop-Zemlia is an excellent example of a relatable teen drama that’s grounded in truth and empathy. (Not to mention excellent performances.) When Masha asks her off-screen interviewer (Gornostai?) whether she remembers what it was like to deal with the kind of emotions that Masha is grappling with every day, her need to be both seen and reassured is clear. She’s ready to give the wider world a try, but she’s not quite ready to jump in without a lifeline — i.e. the ability to stop that world when she needs to. — Betsy Bozdech

Pam Grady: That bittersweet instant poised between adolescence and adult life comes into sharp, yet lyrical focus in documentarian Kateryna Gornostai’s deeply empathetic first narrative feature. The story is built mainly around best buds dreamy but self-aware Masha; Yana, whose cheerful demeanor hides her depression; and Senia, a sweet-natured stoner whose shy smile peeks from beneath the beanie perpetually perched atop his head. While the trio contemplate what the future might hold for them, they also navigate the social order of their school, sometimes remaining an isolated trio, other times joining in with a larger group of popular peers that includes Sasha, the boy Masha crushes on. Interspersed with this delicate, episodic narrative are interviews with all the teens talking candidly about themselves at this pivotal juncture. Small, sometimes seemingly inconsequential moments reveal character and the nature of relationships – not just between peers but also with parents and siblings – in an episodic drama that unfurls at the rhythm of real life.

Sherin Nicole Stop-Zemlia, created by Ukrainian director Kateryna Gornostai, is very much like America’s Euphoria. That sense of dancing among the tall weeds of teenaged life while wondering if your next dizzied step will lead to adulthood or something worse. It is not easy and it is uneasy, but the film is lovely in its warm tones countered by bleached pastels, and in its compassion for Masha (Maria Fedorchenko) alongside the other nearly grown characters—all of them on the verge of knowing themselves.

Leslie Combemale Harken back to a time when you actually cared what people thought. Stop-Zemlia sets up camp in that dead center in that incredibly uncomfortable emotional geography. Though the narrative feature is Ukrainian, the film brings home the fact that teen angst is universal, and captures the double-edged sword of seeing and being seen social media can be. Gornostai’s film feels thoroughly lived in, not least because of the commitment the young cast of actors show to their characters. The mix of optimism and hopelessness is something that will resonate with everyone, whether close in age to Masha and her school mates, or recalling these kids’ feelings from their distant past. I welcomed the mix of compassion I felt for the characters and the gratitude I felt that the days of questioning who I am and obsessing about my friends are long, long gone.

Jennifer Merin Ukrainian docmaker Kateryna Gornostai’s debut narrative feature follows teenage Masha and her high school pals through daily life and their endemic emotional angst while they await their graduation into an adult life of uncertainty. Gornostai’s background in documentary filmmaking serves the film’s largely improvised script well, bringing a sense of authenticity to the kids’ challenges about their emotions, relationships, mental health, sexual identity. The kids discuss their feelings and issues in depth in to-camera interviews conducted by (we assume) the director herself. The ensemble of fresh-faced young actors is thoroughly engaging. Gorostai’s storytelling reflects an enormous amount of respect for both her characters and the young people who play them, which feels particularly poignant considering how teenage girls and their stories are far too often represented in ways spanning from reductive to patronizing. Stop-Zemlia offers sensitive insight into the unsettling feeling of being young and feeling the pressures of an unknown future.

Loren King Director Kateryna Gornostai’s assured debut feature immerses the viewer in a slice of teenage life in the Ukraine that looks like teen life in many other places. It’s a convincing, often compelling portrait of kids on the cusp of young adulthood as they attend school, engage constantly with their smartphones, joke, squabble, nurse crushes and attend to growing pains. Though an ensemble piece, the film centers on sensitive Masha (Maria Fedorchenko) and her quirky friends Yana (Yana Isaienko) and Senia (Arsenii Markov). Masha’s interest in Sasha (Oleksandr Ivanov) a classmate living with his single mom who struggles to connect with him, provides much of the plot. But mostly the film is a confident, documentary style look at ordinary teen life without cliches and with much of the dialogue seemingly improvised by the young cast.

Susan Wloszczyna: When you’re in your adolescence, every step ypu take on the road to maturity is fraught with emotion and exploration, whether it involves sex, under-age drinking, the use of illegal drugs or flirting with both sexes while defining yourself as a person. In Stop-Zemlia, Ukrainian filmmaker Kateryna Gornostai, known for her documentary work, uses her tools to crack open what it’s like to be Sweet 16 and in high school in this Eastern Europe country. Read full review.

Sandie Angulo Chen: Ukrainian documentarian Kateryna Gornostai’s narrative feature debut is a wonderfully nuanced coming-of-age story. The framing story is a documentary of a Ukrainian grade-11 class in their last year of high school. Although the movie includes interview segments with all the students, it focuses particularly on quiet and thoughtful Masha (Maria Fedorchenko) who’s best friends with a seemingly edgy but remarkably sweet guy Senia (Arsenii Markov) and intelligent and reserved Yana (Yana Isaienko). Masha has a crush on handsome Sasha (Oleksandr Ivanov), who’s busy dealing with an emotionally demanding single mother. Most of the students don’t know what they want to do after graduation. It’s a quiet film – some drinking, dancing, and hooking up, but no Euphoria-level hedonism – that accurately captures the essence of that briefly held moment between childhood and adulthood. A captivating look at the universality of adolescence.

Cate Marquis The Ukrainian high school students in Kateryna Gornostai’s Stop-Zemlia seem like teenagers anywhere in many ways, and yet they don’t, as they grapple with the kinds of things teenagers have always grappled with: friendships, the future, identity, feelings, budding romance, as they pull away from parents yet still need them. Gornostai brings her skills as a documentary filmmaker to bear in Stop-Zemlia, her debut narrative feature, introducing us to characters at first through documentary-like interviews and then fly-on-the-wall observations of interactions at school. The title comes from an East European version of blind-man’s bluff, where the blindfolded person, just before they tag someone, calls out “stop-zemlia,” meaning “stop the world.” The film primarily focuses on Masha (Maria Fedorchenko) and her two best friends, a girl named Yana (Yana Isaienko) and a boy named Senia (Arsenii Markov), and also on a boy named Sasha (Oleksandr Ivanov) on whom Masha secretly has a crush. Avoiding the familiar high school stereotypes like cliques and rivalries, Stop-Zemlia is a touching, insightful drama told in a naturalistic way, partly improvised, that presents a view of adolescence that feels more real, recognizing the questioning, the unspoken secrets, and the fragility of the age.