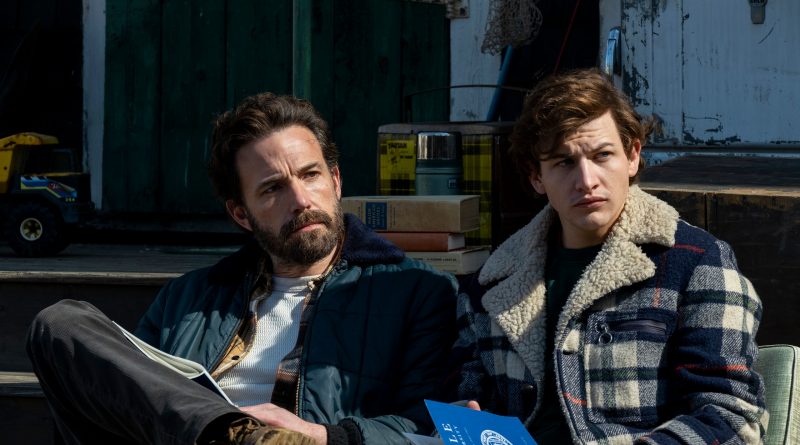 A beloved figure at his working-class bar, The Dickens, philosophizing Uncle Charlie offers naïve, vulnerable J.R. unconditional love, promising: “I’m never going to let you win, and I’m always going to tell you the truth.” Insofar as “the male sciences” go, he cautions: “Don’t ever hit a woman. Even if she stabs you with scissors.”

Uncle Charlie encourages his ambition to become a writer, knowing that J.R. will inevitably track down his deadbeat dad (Max Martini), a radio disc jockey known as “The Voice” who never wanted him and doesn’t care about him.

Based on Pulitzer Prize-winner J.R. Moehringer’s 2005 memoir, it’s somewhat superficially adapted by screenwriter William Monahan, who follows J.R. to Yale, where he falls in love with a classmate (Briana Middleton) and ignores his mother’s desire for him to go to law school in favor of becoming a journalist.

(In recent years, Moehringer collaborated with Andre Agassi and Nike co-founder Phil Knight on their autobiographies and worked with Prince Harry, Duke of Sussex, on his, scheduled for later this year.)

FYI: A bar known as The Dickens – with a fading likeness of Charles Dickens painted on the side of the building – was a real Long Island establishment but, for the film, the setting was re-created in several Massachusetts towns.

Not surprisingly, the Screen Actors Guild nominated Affleck as Best Supporting Actor for this film. It’s been a productive year for Affleck, who was also almost unrecognizable as the villain in Ridley Scott’s “The Last Duel.” FYI: Affleck won an Oscar in 1997 for co-writing “Good Will Hunting” with Matt Damon.

On the Granger Gauge of 1 to 10, The Tender Bar is a nostalgic, sensitive 6, streaming on Amazon Prime.