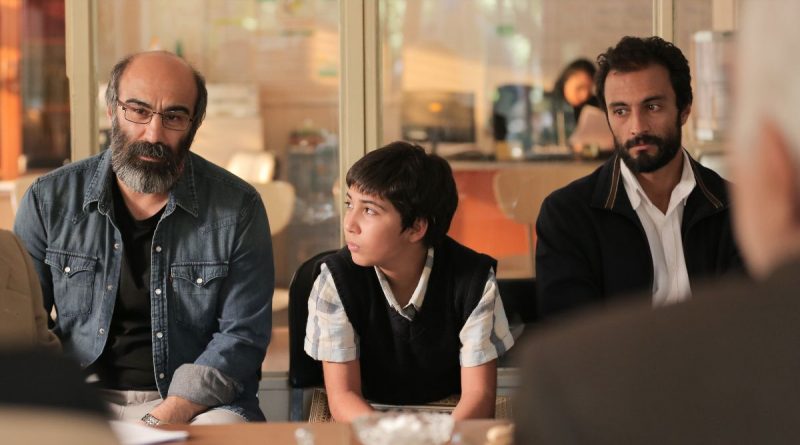 Iran’s official Academy Award submission as it’s International Film is A Hero, a drama/thriller by two-time Oscar-winning filmmaker Asghar Farhadi (A Separation, A Salesman), who sent critics (like me) a letter stating:

“Over the years, with the films I wrote and directed, I have always tried to create empathy between the audience and the characters on the screen; empathy, not only with one group of characters, but with both protagonists and antagonists. In ‘A Hero,’ I continue on the same path with a simple story that gradually turns into a complex situation.”

He goes on to add: “I believe empathy with characters puts the audience in an emotional state that causes them to make a fairer judgment about the characters and, hopefully, themselves.”

Set in the Iranian city of Shiraz, the film follows sign painter/calligrapher Rahim (Amir Jadidi), a divorced father imprisoned for debt, who is given a ‘furlough’ of 48 hours to convince his dour creditor, Bahram (Mohsen Tanabandeh) who runs a copying/printing store in a shopping mall, to drop the charges.

To consult with his brother-in-law Hossein (Alireza Jahandideh), Rahim climbs the scaffolding-covered Naqsh-e Rostam, a mountain necropolis containing the royal tombs of Persepolis, including the remains of Xerxes the Great.

A short time later, conscience-stricken Rahim decides to return a lady’s lost handbag containing 17 gold coins. His humanitarian gesture turns into a full-blown media event, catapulting him, his family and prison authorities into public scrutiny. It’s reflective of our contemporary ‘cancel culture’ – when somebody becomes famous for doing a good deed, others try to bring the hapless hero down.

The complex narrative explores universal themes of honesty, honor and the price of freedom by showing how half-truths and lies can erode the soul and exposing how insidious judgment by social media is increasingly prevalent.

In competition for the Palme d’Or at last year’s Cannes Film Festival, A Hero won the Grand Prix.

In Farsi with English subtitles/narration – on the Granger Gauge of 1 to 10, A Hero is a subtly suspenseful 7, streaming on Amazon Prime.