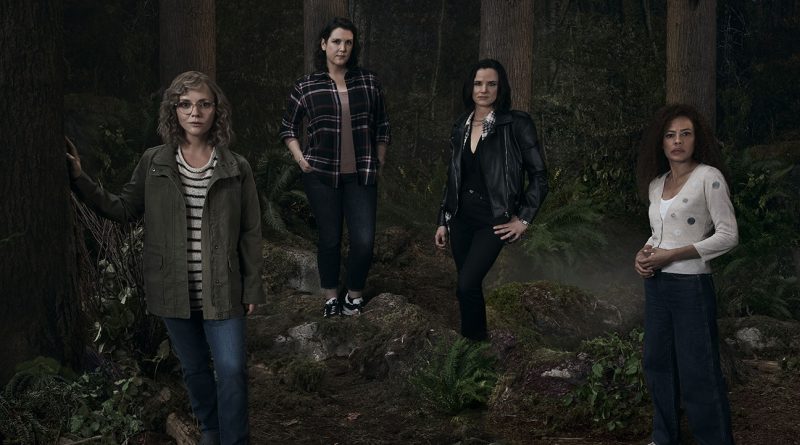 Without doubt, Yellowjackets on Showtime is the most provocative new show of the season. Combining the classic premise of Lord of the Flies with the skittery, supernatural spookiness of Lost and the horror thriller Alive, it’s about teenage girls on a New Jersey high school soccer team.

After qualifying for the 1996 national championships, they board a private plane to fly to the state of Washington. But there’s an accident, and they crash-land in a remote forest somewhere in the Canadian Rockies.

Apparently, some of them were eventually rescued – because we meet them again – 25 years later – in 2021. They’re now adults, but they’re all traumatized, haunted by what happened in the 19 months during which they became feral, foraging, farming and, basically, struggling to survive.

Initially, tension erupts between insecure Shauna and her popular best-friend, team captain Jackie (Ella Purnell) because, apparently, Jackie’s boy-friend Jeff (Jack Depew) was not only unfaithful but impregnated Shauna just before the plane departed. Now – in present time – Shauna is married to Jeff (Warren Kole) and they have a teenage daughter, Callie.

Showrunners Ashley Lyle and Bart Nickerson, along with Jonathan Lisco, have concocted an eerily disturbing, ongoing mystery that’s not only sinister (hinting at cannibalism) but constantly surprising. Before long, you’re hooked – and it’s horrifying!

And Ashley Lyle has confirmed that other survivors are out there – somewhere – and will appear next season.

On the Granger Gauge of 1 to 10, Yellowjackets is an unpredictably intriguing 8 – streaming on Showtime – with Season 2 already in the works.