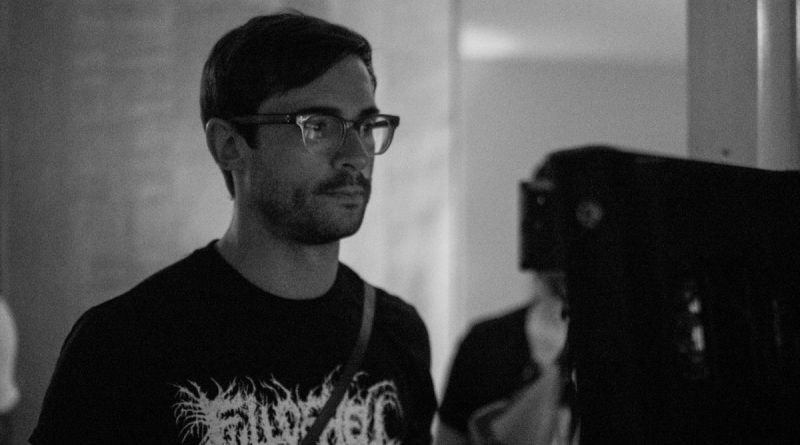 The 2022 Sundance Film Festival is about to get underway, in a virtual mode again this year. On the upside, everyone has access to purchasing tickets to an event that was once rather exclusionary, limited to those who could attend the festival in the quaint town of Park City, Utah. The film Dual, written and directed by Riley Stearns, is a part of the Sundance Film Festival in the US Dramatic Competition category and I recently sat down to talk with him about the origins of the film, the hurdles, and what audiences can expect.

Pamela Powell: Riley Stearns thank you so much for talking with me about your Sundance Film Dual premiering January 22nd starring Karen Gillan and Aaron Paul. What sparked creating this story?

Riley Stearns: I wrote this short film that had an actor acting opposite themselves at a certain point. Because that never ended up getting made, I couldn’t really get away from the idea of having an actor be opposite themselves. I know it’s sort of a gimmicky thing that people have done in the past, but I felt like I had an interesting spin on it. That evolved into what Dual is today.

PP: One of your previous films, The Art of Self Defense has a similar tone. Let’s talk about that tone as you describe what Dual is about.

RS: Dual is about a woman who is suffering from a terminal disease and in this alternate reality you can have yourself cloned so your family doesn’t have to miss you. [The clone] kind of just takes over for you. But in this instance, our lead character, Sarah, ends up going into remission and since there can’t be two of you existing at the same time, they’re ordered to train for a duel to the death that will take place a year after the set date. That doesn’t give away anything. The rest of the movie happens from there. I think that people are going to be surprised … it’s a film that again is darkly comedic, it’s violent at times, but it also never kind of lingers on violence. I think it’s a really human film for as stylized as I tend to try to be and write. It’s grounded — a little bit more than Self Defense — but it still has moments of hyper reality. If you liked that movie I think that you kind of know what you’re in for.

PP: I find it interesting that you’re a male and you’ve written a lead female role. You do a great job of being able to tell this story from a female’s perspective and the interactions that occur among all the different characters, in all the different relationships. Why did you choose a female over a male as your lead character?

RS: For this one I didn’t want it to feel too literal so I’d always had the idea of Sarah being woman. It feels more fun for me to write for women because it’s not me. I feel like I get to step outside of myself a bit, and that makes you look at things through a different set of eyes. I just like really getting to hone in on what she would be feeling and trying to still make it believable to everyone. PP: Karen had two roles; she played herself and then her duplicate self with a deadpan kind of sense of humor yet everything was very poignant at the same time. Tell us about creating that tone not just in the script but with your actors as well.

RS: Everything is comedic in the movie … but not in a jokey sort of sense. I’ve talked about this before in the other movies, but the same is true here. If you say a line as if your character believes it implicitly, that’s really [where] humor lies. So the ridiculousness of the line is the humor not the way that the actor performs it, trying to remove a lot of the emotion in the delivery. I tend to call it removed emotionally than deadpan but along those lines for sure.

PP: One of the scenes that really stands out to me is when Sarah’s being told that she’s being sued by her duplicate for her life and what that means. Can you can you take us to that scene and how you directed Karen as we see the wheels spinning, we’re thinking the exact same thing that she’s thinking.

RS: The scene is the lawyer’s office where she’s finding out all the stipulations that are going to be in play. When she finds out that not only has she gone into remission but her clone has decided to file a suit, I told her basically to play it as if you’re the audience. Like you, for some reason even though you lived in this world, you didn’t really know about cloning, but then also had no clue that there is this potential duel to the death if your clone wants to stay. The entire way through it’s all about her reaction to this information. I think in a way that makes us, the audience, feel like that’s us on screen.

PP: Unfortunately, we’re dealing with COVID and you had a lot of hurdles to jump over in order to make this film. Tell us about the filming location and what happened with that.

RS: We were scheduled to go prior to COVID, but once COVID hit, everything got put on the back burner. My producers ended up pitching Finland as an option because of their relationship with the finance out of Finland but then also the the country did a really great job at handling the pandemic. There it’s a very community-minded country, everyone looks out for each other… and so we jumped at the opportunity to shoot there and it informed the look of the movie it, informed the tone in ways that I could have never dreamed of had we shot in the United states. Then obviously [COVID] now led to Sundance having to go into this virtual mode which is sad in some ways but I’m also really excited that people are going to get to see it [who] maybe wouldn’t have gotten a chance before. PP: I want to talk about the martial arts theme you have in your previous film, The Art of Self Defense and now Dual. Is there something in your personal life where you like to integrate this aspect into your stories?

RS: I like watching the action movies but I’m not necessarily an action movie guy. That said, I do jujitsu as a hobby and I’ve been doing it for years now, almost nine years. I’m a brown belt and something I just love. The idea for The Art of Self Defense came about very, very, very loosely on my experiences of learning.

RS: Yeah definitely! I had a much milder experience with it.

RS: Exactly, no death yet! Dual by the nature of the movie just has some combat stuff in it, but it’s funny. There’s this one fight scene that you know of that is sort of in a super slow motion, but I’m very, very excited about seeing how people respond to it.

PP: Riley Stearns, thank you so much for joining me to talk about Dual which premieres Saturday, January 22nd at 7:00 PM Central Time. I wish we could be in Park City to celebrate this but like you said, everyone everywhere can stream this movie.