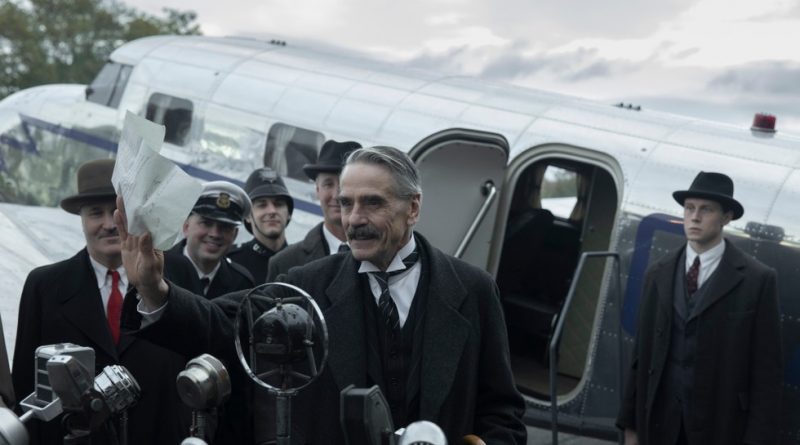 Munich – The Edge of War dramatizes the 1938 Munich Agreement

In Munich – The Edge of War German director Christian Schwochow dramatizes the September 1938 meeting of the top echelon of Germany and Italy, England and France leading to a non-aggression pact meant to ensure peace. The hope driving negotiations and self-delusion is that appeasement will satisfy Führer Adolf Hitler as he prepares to annex the Sudeten German territory of Czechoslovakia.

Of course, we all know how that turned out. Nonetheless, the imagined, behind-the-scenes political maneuvers create suspense, centered on a desperate struggle to dissuade Britain’s Prime Minister Neville Chamberlain believing this will pacify Hitler. That task falls to Hugh Legat, one of Chamberlain’s private secretaries, and Paul von Hartman, employed by the German ministry. Hugh and Paul attended Oxford together, where, in one of the film’s best scenes, set in a bar in 1932, they have a bellicose confrontation as Paul champions Hitler’s popular appeal to German pride, an emotional lure that continues to resonate powerfully today.

As events progress in the ’30s, especially the anti-Semitism, Paul recognizes the evil lurking within this nationalistic enticement. Reuniting and partnering with Hugh, they both become intent on delivering to Chamberlain a secret, official document asserting Hitler’s real goal: future invasion of Europe for further acquisition of land. Hugh must convince Chamberlain that appeasement won’t work, and Paul must evade his enthusiastic, suspicious German Nazi cousin, this adding a dangerous element.

Based on Robert Harris’ 1967 novel, with a screenplay by Ben Power, the film, loosely based on real people, has generated debate over the historical accuracy of these back door events and Chamberlain’s aversion to war, hardened in this telling by his WWI experiences and his assertion that Britain is not presently militarily prepared for battle. Keeping this in mind, factually the Munich Conference, attended by Chamberlain and French Prime Minister Édouard Daladier, did occur with the Munich Agreement paving the way for Hitler’s initial territorial aggression. The dovetailing of personal values and political strategy brings the intense crisis to vivid life, with attention to period detail creating an authentic immersion in the costumes, interior and exterior locations, sounds, and lighting.

The adversarial relationship alternating with chummy friendship is handled well by George MacKay as Hugh Legat and Jannis Niewohner as Paul von Hartman. Jeremy Irons as Neville Chamberlain and Ulrich Matthes as Hitler show exceptional skill in their performances. Keeping the pace brisk by cross-cutting through parallel action, Munich – The Edge of War captures the complexity of complex diplomatic experiences, much less those against wartime threats. In English and in German with English subtitles.