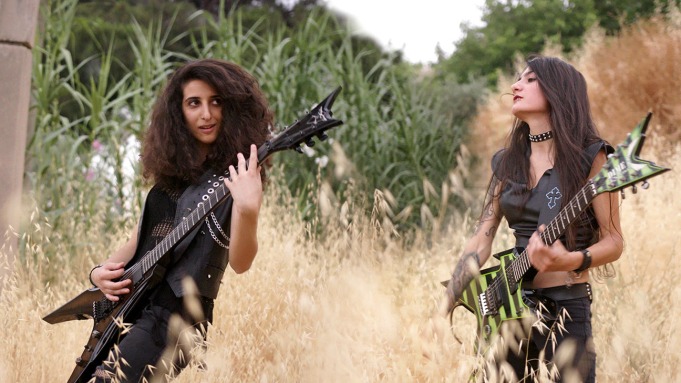 Even in the US, death metal bands fronted by women are rare, so you can imagine Slave to Sirens, the Middle East’s first all-female metal band, have to contend with exponentially more misogyny and judgment. Writer/director Rita Baghdadi’s new documentary Sirens, which had its premiere at Sundance, profiles Slave to Sirens’ bandmates Shery, Maya, Alma and Tatyana as they work in their spaces on the outskirts of Beirut and out on the road to break into a part of the already male-dominated music business that is even more devoid of female representation.

When the band gets invited to play Glastonbury, one of the largest music festivals in the world, they think their time to shine has finally come. When the experience proves decidedly anticlimactic, the pressure and disappointment leads to infighting between Lilas and Shery. Are they just bandmates, or friends, or a part of an unbreakable tribe? Against the backdrop of a fiery Beirut, the band starts to implode.

As anyone who has friends in a band or has been in a band themselves will tell you, bickering and grousing are part and parcel of being in any band. As no doubt Liam and Noel Gallagher of Oasis will tell you, it’s not enough to have talent. If you have personal demons to wrangle, or a journey of self acceptance to you’ve got to take, best to do it without self destructing or imploding the band from within. Contrary to legend, it’s neither better to burn out nor to fade away. Professionalism, open communication, and patience are essential to any musical group’s survival.

In Sirens, we see all-female bands are no exception to all that. In slice of life, cinema vérité fashion, the film spends a lot of time showing the women rehearsing, making plans, and chronicling bits of the arguments that drive Lilas and Shery apart. Viewers are privy to some of Lilas and Shery’s fears and insecurities, which leads to a connection with them, and by extension a hope for their success, or at least contentment.

However, if Baghdadi meant to juxtapose these women’s individual feelings and aspirations against a larger framework of feminism and parity for women in music, it falls short. There’s not nearly enough context supplied, and at times Sirens feels so introspective and specific that it comes close to becoming a Spinal Tap-like parody of itself. The same is true for how Arab women are seen both in the US and around the world, especially as they enter into roles nearly always taken on by men. I wanted more context. I loved these ladies, and wanted to know more about where they fit in or didn’t fit into their own world and the larger world around them. I wanted to see a lot more performance, hear more from the other band members, and be offered some kind of trajectory that would create an arc to their story.

It was interesting being transformed into a fly on the wall, getting to know the ladies of Slave to Sirens a bit, and in that way the film was entertaining. Fans of heavy metal, especially the thrash and death metal sub-genres, will enjoy the introduction and a view into Slave to Siren’s world. This band is clearly struggling to make it, whether the music business and cultural zeitgeist are ready for them or not. Though competent filmmaking and, it seems, a labor of love for Baghdadi, I wish it had shown more of what these fearless, musical ladies have to offer.