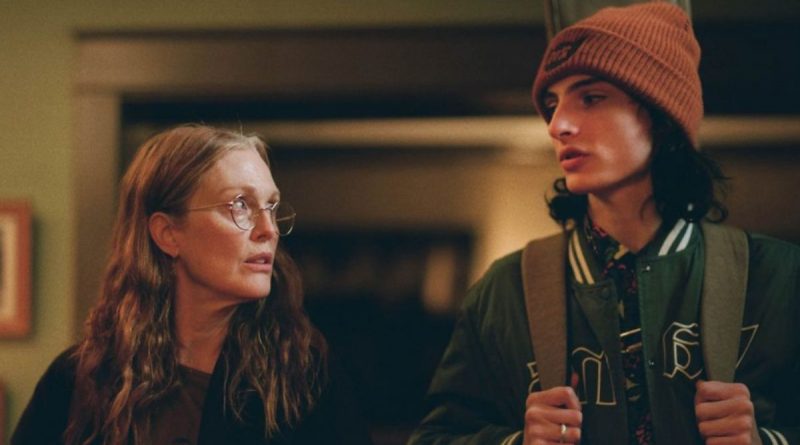 Written and directed by Jesse Eisenberg, When You Finish Saving the World explores the often uncomfortable relationship between mother and son. Julianne Moore and Finn Wolfhard deliver powerhouse performances in this Sundance 2022 film, in which there is often despair and discomfort but also a fraction of hope and change.

In the film, Moore’s role Evelyn runs a domestic abuse shelter in a small town. Despite serving as a caretaker for battered women, Evelyn struggles to find the wherewithal to show up for her husband (Jay O. Sanders) and son (Wolfhard). Meanwhile, her son Ziggy is so caught up in the relationships he has with his fans halfway across the world — he’s an internet sensation on Eisenberg’s futuristic music-sharing platform Hi Hat — he misses out on the countless opportunities to connect with his mother.

Insert Kyle (Billy Bryk), a resident at the shelter who Evelyn instantly takes to. After connecting with Kyle, Evelyn continues to overstep her boundary by taking Kyle to Ziggy’s favorite restaurant, involving herself in his college applications, and even going so far as to demand Kyle take a particular course of study.

All the while, Ziggy seeks approval from his intellectual classmate Lila (Alisha Boe). But instead of investing in a genuine connection, Ziggy places all of his value in his internet fame.

Just when the audience thinks there’s no hope for Ziggy and Evelyn to come together, the movie ends with Evelyn exploring Ziggy’s catalog of music online as Ziggy wanders the halls of the women’s shelter admiring Evelyn’s accolades. I wished there was more of this, but I think that was kind of the point.

During the Q&A session after When You Finish Saving the World’s Sundance premiere, Eisenberg mentioned how the film forces viewers to consider their relationships and value systems. “I mean, I guess I don’t ever think of them in that way,” he said, adding:

“I think these people are strong-willed people, struggling to kind of make sense of their world, given a somewhat rigid sense of their value structure and how it reconciles or contrasts with the person that they’re living with. At the end, I’m trying to say that when you finish saving the word, when you finish doing that thing that you excel so well in, look at your family member. Maybe watch their Internet videos and maybe go visit their shelter. When you’re finished doing this amazing thing, just pay attention to that other person and see the value in their own specific pursuits.”

We can all do amazing things. But what’s even more important is recognizing the people around us and the amazing things they’re doing, too. When You Finish Saving the World is an astounding reminder of that.