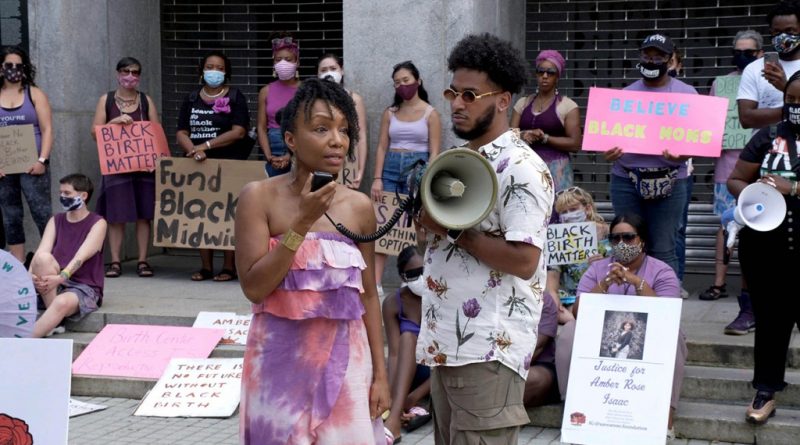 There’s an epidemic that has been raging way longer than the COVID pandemic. It’s the maternal mortality rate of Black women in this country. The statement in co-directors Paula Eiselt and Tonya Lewis Lee’s new documentary Aftershock by Black mother-to-be Felicia Ellis says it all. “A Black woman having a baby is like a Black man at a traffic stop with the police.” It articulates well the state of emergency for pregnant Black women across the US. Her story is one of the more optimistic ones represented in a film that is as important as it is difficult to watch.

The film centers on and examines two preventable deaths of young Black women due to complications of pregnancy or childbirth. The after-effects, or ‘aftershock’ of their loss to the bereaved fathers and the victims’ loved ones, and the new babies left without mothers is excruciating. Bruce McIntyre, Amber Rose Isaac’s partner, and Omari Maynard and Shawnee Benton Gibson, Shamony Gibson’s partner and mother, bring voice their experiences of loss, and to the injustice of Amber Rose and Shamony’s deaths. Watch the film to hear the stories of their pregnancies and births gone needlessly and horribly wrong. It is all due to apathy, racial profiling, misogyny, and a neglect that seems to be pervasive when deserving pregnant Black women seek to safely birth their babies. Shamony and Amber Rose are just two of the many, many women that fall victim to a broken medical system. Bruce McIntyre questions how we got to this dangerous place. “It was safer for our parents to have children than it is for us. Why is that?” As the filmmakers follow new fathers Bruce and Omari, viewers are a witness to their grief, their commitment to activism for systemic change in the maternal health space, and the growth of a loving brotherhood of Black men and fathers who have survived loss.

Eiselt and Lee then expand the examination to include communities across the country struggling with their own losses and challenges. The atmosphere of racial bias is in part responsible for these unacceptable statistics. The current medical establishment have rules and bottom line that have made it particularly unsafe for Black women to give birth in this country. The filmmakers include interviews of Shamony’s mother Shawnee Benton Gibson, who was already working for reproductive and maternal justice before the death of her daughter. We also see her, along with others effected by this crisis, actively engaged in activism, educating, working for legislative change like the Black Maternal Omnibus Bill), and demanding accountability from the medical community.

Also profiled is Professor of Obstetrics and Gynecology at Harvard School of Medicine Neel Shaw, who sees the problem and the need for change. In Tulsa, he speaks to health professionals at Hillcrest Medical Center, where the overall percentage of Black women who give birth is 10%, but represent 20% of deaths. Shaw knows it is indicative of an alarming and unacceptable nationwide trend. “I believe the wellbeing of moms is a bellwether for our society in general. That’s why is shows up in maternal health and maternal health outcomes.”

As dark and sad as much of this film can be, it also, incredibly, finds ways to show hope and joy. Armed with the knowledge of risk she takes on as a pregnant Black woman, Felicia Ellis and her partner seek out a birthing center in hopes of creating a better outcome. Of course like most in the US, the center doesn’t take insurance. Still, as affirmed in the documentary, it is an environment in which the safety, comfort, and bodily autonomy of the mother-to-be are of paramount concern, and still trumps financial interest. Also beautifully captured, and all too uncommonly exampled in either documentary or narrative film, is the true strength, openness, and compassion of the many dedicated Black fathers out there. Bruce, Omari, and many other Black men who find themselves in the same situation are shown supporting and uplifting each other, and working to make sure these painful losses don’t happen any more than is absolutely necessary. They and all the film’s subjects want Black mothers to feel safe giving birth in the US. If enough people see Aftershock, it will raise awareness so that together we can help end a crisis that in increasingly failing our sisters around the country.