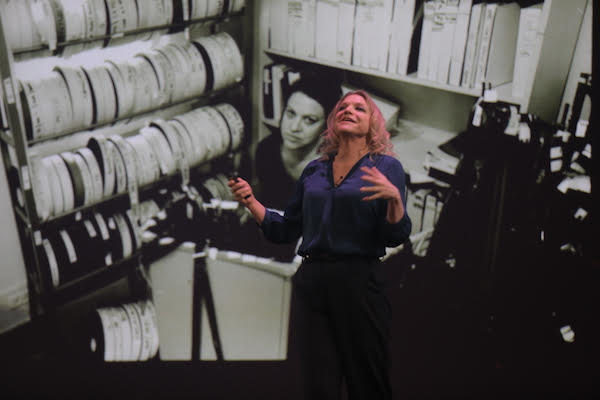 Picture the scene in 1962’s Dr. No, where Ursula Andress as Honey Rider appears from beneath the waters singing “Underneath the Mango Tree”, or its more recent counterpart, Halle Berry as Jinx rising dolphin-like and in slow motion in Die Another Day. You might think these moments of objectification and sexualization are particularly memorable, but they are by no means unique. Filmmaker and educator Nina Menkes cuts a wide swath through the history of cinema to prove those kinds of shots are the rule, not the exception, and part of the cinematic language we have all been watching at the movies for decades. In her documentary Brainwashed: Sex-Camera-Power, which is inspired by her lecture “Sex and Power: The Visual Language of Cinema”, Menkes uses over 170 clips from films from the 1940s to the present from all genres to demonstrate that shot design is gendered. She makes a strong case for the idea that the visual grammar of cinema creates an environment that encourages discrimination, pay inequality, and sexual harassment, both inside and outside the film industry. Cinephiles may find themselves defensive about their favorite flicks, but it’s hard to ignore the many points she backs up with examples. Brainwashed may well fundamentally change the way we watch films, and it should.

Menkes takes us through that visual grammar, looking at point of view, or the way characters serve as subject or object, how characters are framed on the screen, camera movement, lighting, and narrative position. In terms of point of view, even with a female lead, many scenes are shot from her male counterpart’s perspective. In framing, she uses a number of examples that show how often women are shot with fragmented bodies, whereas male bodies, even when sexualized, are fully shown. Camera movements like body pans and the use of slow motion no doubt bring an avalanche of scenes to mind, not least is the one featuring Berry’s Jinx, but there are literally hundreds if not thousands of examples in film history. I was fascinated to have it pointed out that men are largely shot in slow motion in scenes of violence and action, whereas slow motion is more often used for women in sexualized situations. There was an elucidating example of narrative position with the opening scene of De Palma’s Carrie, in which naked girls are randomly shown romping in a locker room. It has nothing to do with the storytelling, but what auteur filmmaker can pass up another excuse to show nipples?

Taking part in the discourse are academics and film historians including cultural transformation scholar Dr. Raja Bhattar, professor and filmmaker Iyabo Kwayana, Director of the UCLA Film and Television Archive May Hong HaDuong, and of course the feminist film theorist who coined the expression ‘male gaze’, Laura Mulvey. There’s insightful analysis by Dr. Sachiko Taki-Reece, a psychoanalyst. Also offering their perspectives are well-regarded and award-winning filmmakers like Julie Dash, Penelope Spheeris, Catherine Hardwicke, Joey Soloway, and Maria Giese, who instigated the federal investigation of sex discrimination in Hollywood in 2015. Giese also acts as executive producer on the film.

As to Laura Mulvey, not all of her work has stood the test of time as well, but she is without question someone who stirred up the conversation early on about the limited visual palette used in film that begged reconsideration. If, however, there’s a male gaze, that suggests there’s a female gaze, which has always felt too limiting. Cis white men have been in charge of Hollywood since realizing filmmaking could be a moneymaking enterprise. As always, it comes down to patriarchy. Menkes is bringing our attention to not as much the male gaze as the patriarchal gaze.

What will make lasting change inside and outside of the film world is movies showing anything other than that same-old same-old gaze. Non-binary filmmaker Soloway says the answer is to hand over the camera to those who can bring something more. Hand it over to women, especially BIPOC and LGBT women and non-binary folk, who will bring something different. Even female filmmakers have used the visual language of patriarchy, often because it is tried and true, and what sells, or just in an attempt to get a seat at the table. Though overall this film is essential viewing, it bears mentioning that there are female filmmakers attempting to leverage traditional, or patriarchal cinematic language in the service of their story, and sometimes it can be very effective. Still, that requires a viewer’s awareness of the near universality of the patriarchal gaze to recognize when it’s being subverted, or manipulated, or tossed out altogether. Also, most examples of filmmaking that avoids this cinematic language are from Menkes’s own work, and it would have been good to see a wider array of filmmakers. That she, as a director herself, is bringing attention to the problem as a whole will likely lead curious viewers to seek out her films anyway, and there are lots of little-known and inventive artists doing great work in this arena.

None of this is to say that films using this gendered language, many of which are considered cinematic masterpieces, aren’t worthy or valuable. For example, I’m well aware of Hitchcock’s personal shortcomings and questionable methods of getting the best performances from his actors, but that doesn’t stop me from appreciating Rear Window and To Catch a Thief, which will always be two of my favorite films. Rear Window is used as a prime example in Brainwashed, but I’ll still love Miss Torso till the day I die.

Menkes isn’t asking you to toss them in the trash. Like Soloway, she’s suggesting filmmakers, producers, and filmgoers should demand more. That’s a tough thing to make happen with this visual language so entrenched and, at this point, hardwired in our psyches. Historically, when someone has been brainwashed, an intervention is required. Think of Brainwashed as the first step to reeducation.