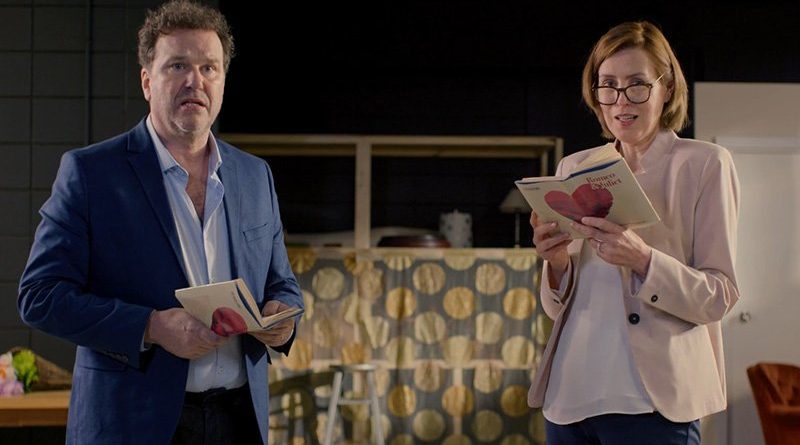 It’s almost impossible for even the most hard-hearted to resist getting caught up in a grand romantic gesture – or A Grand Romantic Gesture. The delightful new film from writer/director Joan Carr-Wiggin is smart and funny, elevating the rom-com genre for an older audience.

The wonderful Gina McKee stars as Ava, who has been forced into early retirement and is feeling lost. Much to her chagrin, her husband (Rob Stewart) and pregnant daughter (Rose Reynolds) sign her up for a cooking class to keep her busy – and ensure they get fed. When a student from an under-enrolled acting class runs in, begging someone – anyone! – to transfer to their class to keep it from being cancelled, Ava immediately volunteers.

It turns out the aspiring actors are rehearsing Romeo and Juliet. Ava bonds with Simon (Douglas Hodge), the only other student her age, and they end up being cast in the title roles, leading to a tumultuous and hilarious real-life romance.

This now gives Ava two secrets to keep. Because she’s passing off gourmet take-out meals as her own, her family doesn’t even know she left the cooking class, let alone that she’s having an affair. Simon’s wife (Linda Kash), though, is suspicious and determined to make life difficult for the couple.

With its dry humor and scenes interspersed with quotes from Romeo and Juliet, A Grand Romantic Gesture is a gem of a movie. McKee and Hodge are a modern day Hepburn-Tracy whose chemistry is unmistakable even as they spar.

There are so many laugh out loud moments, like when Ava’s daughter is convinced her suddenly dreamy mom has Alzheimer’s and Ava says, “Well, they are close, dementia and love.”

I was trying to come up with a good Shakespeare quote to end this review but think it’s more appropriate to just take a line from the movie itself. To sum it up, “They all snore – even the Romeos.”