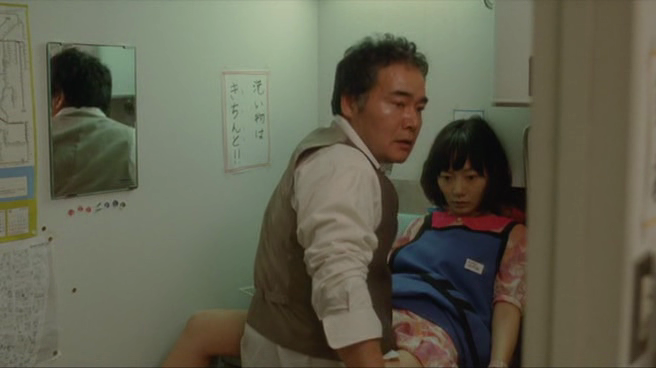 Japanese director Hirokazu Kore-eda has a well-earned international following as well as numerous awards. The distribution company Dekanalog, dedicated “to the release of the most unique filmmaking voices,” will now provide on-demand access to Kore-eda’s 2009 Air Doll, a provocative look at contemporary Japanese society and the individual need for, as well as the elusiveness of, affection.

By her own description, a late-model, cheap air doll, Nozimo comes to life when her owner goes to work. Her name meaning “To desire, wish, or hope,” Nozomi explores her Tokyo environment through an untarnished, naïve perspective that invites our own reexamination. Her joy in familiar things we so often look past conveys a refreshing perspective. However, sufficiently quirky, awkward interactions on Nozomi’s part keep the disparate scenes amusing as she struggles to understand real people’s conduct and problems.

During the day, Nozomi works at the Cinema Circus video rental store, leading to numerous film references that suggest how often film infiltrates and influences our lives with ideas, values, and emotion. At times quite philosophical, at other times perplexed, Nozimi reflects on all she encounters, narrating questions and ideas in often poetic voiceover comments. Wandering Tokyo’s streets, among those she observes are: a single father trying to please his young daughter at a restaurant birthday party, a lonely elderly man once a substitute high school teacher, a middle-aged woman confessing to crimes she didn’t commit, a policeman gently tending his flowers, a young bulimic shut-in, a sexually abusive boss, and a similar store clerk, Junichi, with whom she strikes up a relationship. Throughout, she knows she’s a doll for sex (“I am an air doll, a substitute for handling sexual desire”) and companionship by a lonely salaryman.

As Nozomi, Bae Doona alternates between expressionless plasticity and uncoordinated movements and awkward, childlike behavior becoming increasingly human. In one critical exchange, she notes that “having a heart was heartbreaking.” Adapted from a twenty page manga story, an archetypal one to be sure, what lingers and becomes quite touching is the humanity that shines through. Air Doll is available through Video on Demand and Dekanalog streaming services.