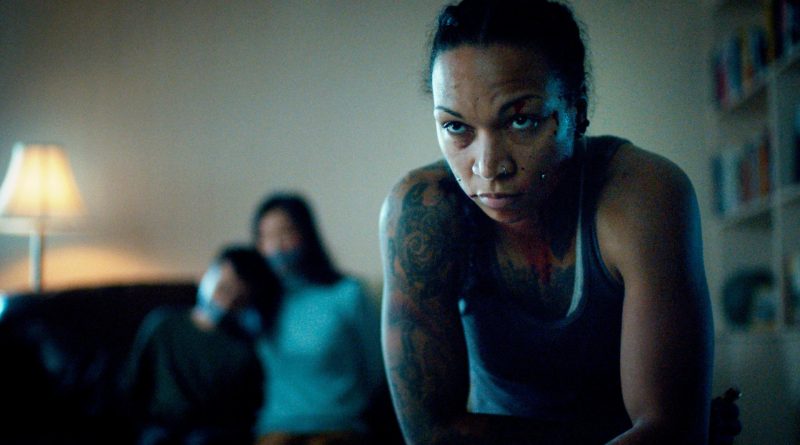 The gritty and gripping thriller Catch the Fair One drops right into a new type of training for former boxer Kaylee. Known in the ring as K.O., she now sleeps at a homeless shelter with a razor blade in her mouth. She still spars at the gym, taking on men much larger than herself, and wrestles bare-knuckled to get out of chokeholds.

She’s not prepping for an ordinary fight. Just survival.

His script, based on a story he and Reis developed, is a lesson in economy, suspense, and subtext. It never takes a predictable turn. Another film might depict Kaylee’s detective work or her bumping against an uncaring bureaucracy. Catch the Fair One instead shows Kaylee and her trainer, Brick (Shelly Vincent), paying a pimp for a lead into a local trafficking ring. He and his recruiter, Lisa (Isabelle Chester), offer her a photo of a teen who might be Weeta. Their bosses like “native girls.”

Brick doesn’t think the girl is Weeta, but Kaylee feels responsible for her. The teen walked home alone from the gym while Kaylee trained for a match. The pimp and recruiter offer to take Kaylee in their latest batch of girls so she can trace Weeta’s likely path—but Kaylee has to go all-in. Once she’s on the inside, she’s on her own.

Reis is mesmerizing in her screen debut, conveying how alone and desperate Kaylee feels. A professional boxing title holder, Reis has the lived-in body language that sells Kaylee’s particular set of skills, from the crouch of her shoulders to fidgeting with a rubber band like she’s wrapping her knuckles.

Yet Reis also conveys subtle emotional beats: from the pain of confronting her mom (Kimberly Guerrero, Longmire), who runs a support group for other native people missing loved ones, to slivers of hope whenever Kaylee imagines Weeta’s puffy red jacket and long dark hair along the way.

This isn’t a crowd-pleasing, convenient rescue story a la 2008’s Taken, as satisfying as it is to see Kaylee give these bastards a reason to fear. Government statistics say that indigenous people are at a higher risk for labor and sex trafficking, and Kaylee faces an intimidating network that reaps the financial benefits of this abuse.

Lisa and a native man are among the smaller players, as is Danny (Michael Drayer, Mr. Robot), who shoots the girls full of drugs for cell phone photos to advertise them. The higher-level white guy (Kevin Dunn, True Detective) and his son (Daniel Henshall, Defending Jacob) Kaylee discovers seem like more cogs in a vast machine.

Kaylee has no grand plan; she’s making it up as she goes, getting hold of a knife here and a gun there, weighing whom she has to hurt to get answers. Low-level thugs are one thing; the abused wife (Tiffany Chu, Artificial) of one guy is another.

Wladyka builds suspense on Kaylee’s journey through a soundtrack of strings by composer Nathan Halpern (Swallow) and wide shots in the bleak, snowy landscape of Western New York—and he offers no simple answers.

“You’re never gonna see her again,” a trafficker taunts at one point. “Nobody’s looking because nobody cares.”

Kaylee does, achingly so. In showing how far that takes her, Catch the Fair One delivers a gut punch.