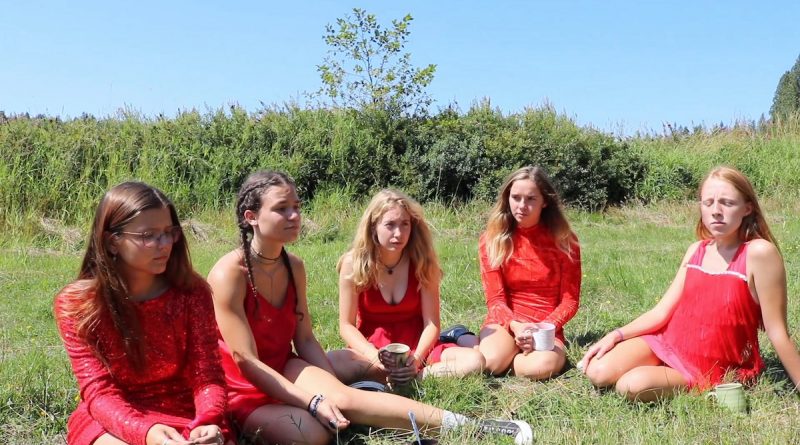 Stories about small isolated groups of individuals cut off from the broader world and left to construct their own new society on their own terms is a far from original premise; from Lost to Lord of the Flies, Yellowjackets to Ladyworld, this microcosmic scenario has lured a diverse range of storytellers resulting in strikingly different tales. Alongside Yellowjackets and Ladyworld in particular, with its shared focus on young woman cut adrift from the world we can now add Avalon Fast’s Honeycomb, whose world premiere is at the 2022 Slamdance Film Festival.

With a screenplay written for a group of her friends specifically in mind to play each of the characters in this ensemble film, Honeycomb was shot on a camping trip on Cortes Island off the coast of British Columbia where the film is set in 2019 and spent a year in post-production. Fast edited the movie as well as directing and co-writing it with another close friend, Emmett Roiko.

Where Honeycomb importantly deviates from the Lord of the Flies trope, however, is that Fast’s characters crucially are not isolated by an accident or some other grand event; rather, they are simply bored and effectively they opt out, leaving very much on their own accord. The film follows Leader (Destini Stewart), Jules (Jillian Frank), Vicky (Mari Geraghty) and Millie (Rowan Wales) who decide to accept an invitation from the fifth member of their friendship circle Willow (Sophie Bawks-Smith) who has discovered an abandoned house in the woods nearby the town they live in on Cortes Island.

Packing up their bags and setting up house, the girls – stranded as they are somewhere between school and the world of adulthood that lies before them – have decided to take a different path. Effectively becoming squatters, except for the brief visits from a group of boys they know, the girls consciously uncouple themselves from the world at large and instead decide to build their own. Articulating and building their own social contract in the service of maintaining order and justice as they see fit, it’s a slow slide into chaos with perhaps inevitable results.

Continuing the important legacy of the late, great Riot Grrrl auteur Sarah Jacobson, there is regardless nothing derivative or nostalgic about Honeycomb. At the age of 21 herself, Fast is freed from the shackles of self-consciousness that seem far too common for so many older, established filmmakers. But to dismiss Honeycomb as merely a curio because of the director’s age does both the film and Fast herself a great disservice. Simultaneously made from a place of deep love for her friends and her passion for storytelling, Honeycomb is a wild, wandering, wonderous film, a dreamy, abstracted portrait of that liminal space between adolescence and adulthood.