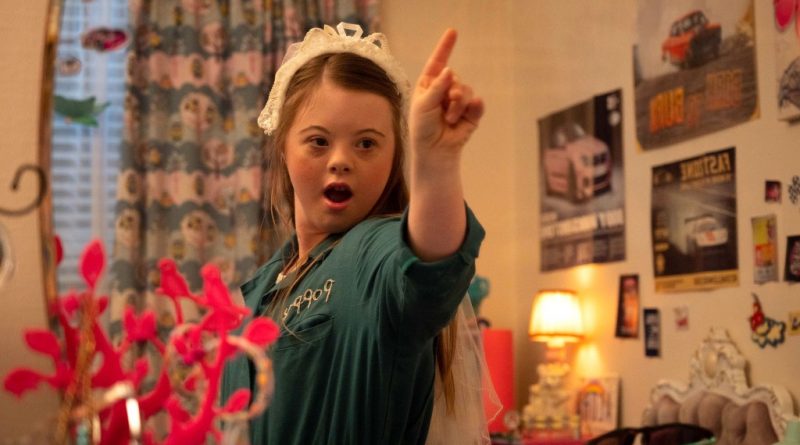 Poppy (Libby Hunsdale) loves cars and music. Loves them. Barely ever seen out of her mechanics overalls with her name delicately stitched about the breast pocket, she works at the family’s garage with her big brother Dave (Ari Boyland). He’s protective of Poppy at the best of times, but even more so now she is getting ready to drive, has started taking active steps towards focusing on her own career, and – gasp! – has taken an interest in a boy. And Dave has his own problems, struggling as he does with the death of their father, looking after Poppy and trying to get his own disastrous love life back on the tracks. And with Poppy’s help, he might just do it.

Oh, and Poppy has Down Syndrome. Which, in Linda Niccol’s New Zealand set romcom Poppy, seems to be an issue for almost everyone else in the film except for its eponymous character herself. The Poppy that she knows – and who we delight in getting to know – is just a young woman who likes to dance in front of her bedroom mirror, watch dating reality TV and dreams of getting behind the wheel of the car herself.

Raw, gritty realism Poppy is not, and makes no effort to be. Instead, we have a sparkly, charismatic lead character who takes the helm, allowing us to be swept away in the ups and downs of her life and that of those around her. Poppy is a very sweet film, with Libby Hunsdale’s performance at the center, allowing Niccol’s to get away with what at times could come across as excessively sentimental.

Most refreshing of all, of course, is the dignity afforded to the character of Poppy herself. The film’s sometimes overt references to Rosie the Riveter in Poppy’s vaguely rockabilly hued fashion sense are clue enough for how both Hunsdale and Niccol view disability. For Poppy, it’s a part of who she is, but it doesn’t dominate her her identity or sense of self. Rather, she is strong, vivacious, ambitious dreamer with more than enough moxy to reach her goals.