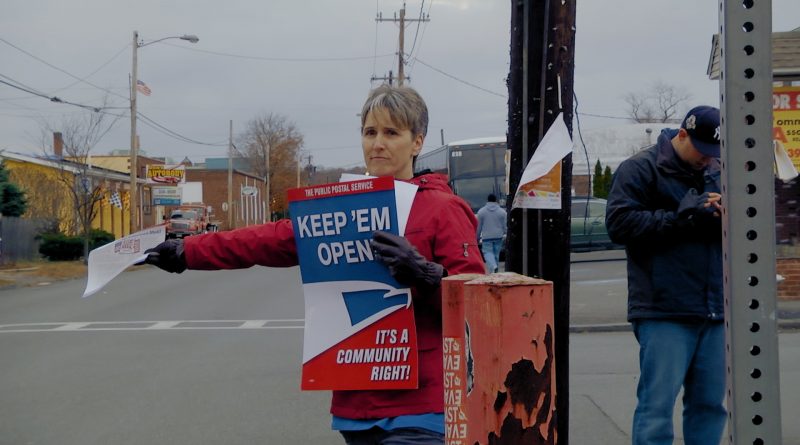 Jay Galione centers the current situation with the postal service (emphasis on “service”) on his father, Robert Galione, a 30-year mail clerk in Maplewood, New Jersey. In doing so, the director of this intense and meaningful documentary starts with very human travails and expands to the bureaucratic chaos on the whole USPS. It isn’t pretty.

Jay Galione interviews his father, who was fired for standing up for his colleagues. Galione talks with Wayne Barr, a carrier who witnessed his workmate, Steve Spencer’s being bullied until he committed suicide. Audrey Davis, another carrier, saw one of the first instances of a colleague’s “going postal” in Michigan. Mary Burkhard, a USPS sales rep, exposed fraud. Jack Mathews, a carrier and president of his union in Gastonia, N.C., started a petition to stop news reports of employees’ “going postal” that do not mention that managers lied to the media about not knowing what could possibly have caused it.

The current situation, as defined by employees and workers’ advocates, resulted from, among other things, the attempt to take the postal service private. Those who want profits at the expense of employees’ mental health and fair wages have been dismantling the postal service. These profiteers include Postmaster General Louis DeJoy, whose family has investments in companies tied to the USPS.

The Center for Public Integrity recently reported that carriers’ overtime is not reflected in their checks; furthermore, managers have been caught changing timecards to flatten the budget. As a consequence of the theft of wages, flocks of postal employees quit long before the pandemic.

Galione’s documentary includes interviews with employees and with advocates like Ralph Nader, who notes that the nature of privatization has been largely hidden, and with Hank Rauer, president of the Alliance Postal Workers Union in New Jersey. It also includes a heart-breaking scene of mail trucks lined up to follow a fellow carrier to his grave. Sometimes, the documentary is hard to follow as it traces detrimental bills that have been passed in Congress, for example, the Postal Accountability and Enhancement Act, signed by Pres. George W. Bush in 2006. Also considered are beautiful post offices flipped into condos and shoppes.

The Great Postal Heist explains a lot about nefarious activity behind one person’s dropping a flyer in our mail boxes. The documentary is a vital and revealing report, well-delivered.