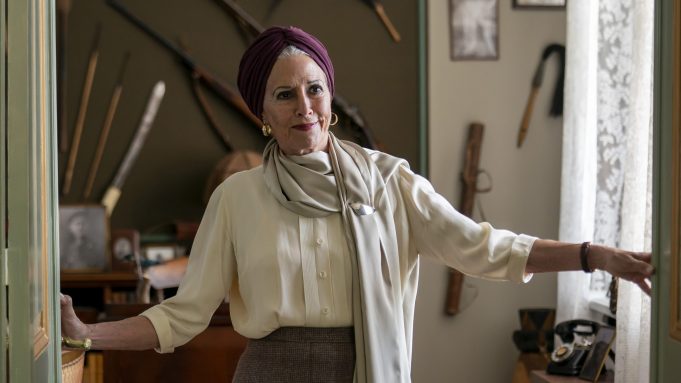 There’s nothing more gripping – and nerve-wracking – than watching someone make a deal with the devil. You know it can only end badly and there’s nothing you can do other than scream at the screen, “Don’t do it.”

In The Pact, a biopic about Karen Blixen, the devil turns out to be the Out of Africa author herself. It’s a whole new view of her and it’s riveting.

The movie picks up the baroness’ life in 1948, 17 years after she lost her home in Africa as well as the love of her life, Denys George Finch Hatton. She’s back in Denmark, 63 years old, at the peak of her literary career but lonely and suffering from neurosyphilis.

When she meets Thorkild Bjørnvig, a 30-year-old aspiring poet, she sees an opportunity for both of them. She offers him a pact – she will help him become the artist he was meant to be if he will always trust and listen to her and dedicate himself to his writing. Smitten with her celebrity status, he agrees.

She becomes more and more demanding, making him move into her house despite the fact that he has a wife and son at home. She encourages him to spend time in Bonn and to have an affair – all in the name of living a full, unconventional life. Of course, he hurts the people he loves in the process and his relationship with his family suffers.

Birthe Neumann is brilliant as the manipulative puppet master and Simon Bennebjerg gives a thoroughly believable performance as her willing pupil. Their connection is electric and genuine.

Director Bille August has created a fascinating film that offers a fresh perspective on Blixen, on creativity and on the questionable sacrifices artists are willing to make for their art. Yes, Bjørnvig made a Faustian bargain but, hey, he ended up writing a bestselling memoir on which this film is based so – at least for audiences – it was worth it.