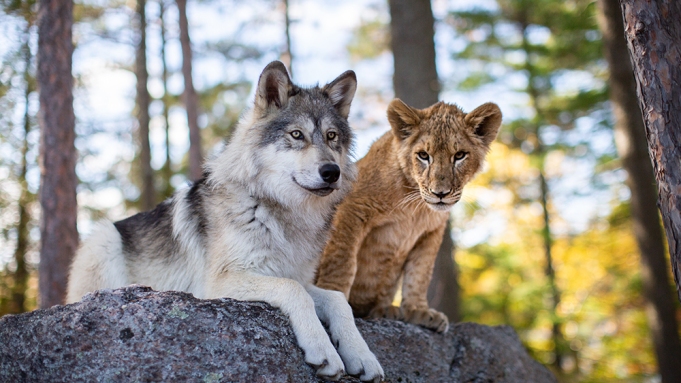 Animal awesomeness roars in The Wolf and the Lion, a family drama that will get the attention of tweens and animal lovers, although their reactions may not be the same.

Directed by Gilles de Maistre from a script he co-wrote with his wife Prune de Maistre, the story follows 20-year-old Alma (Molly Kunz), a music student whose life takes a different direction when a lion cub literally falls into her arms while she’s visiting her late grandfather’s private island in Canada. Realizing the cub is alone, Alma brings it to her grandfather’s cabin and discovers the island’s friendly silver wolf, along with her pup, has taken refuge from hunters inside the house. While Alma tries to find a safe and proper placement for the cub, the animals bond and the foursome quickly become an unlikely family.

Finding entertainment for tweens can be challenging – mostly because, as labeled, they are in between children’s films and adult fare. Kids 9-12 side eye a film and calculate: Is it too babyish, too lovey-dovey, too learny, too boring? But children this age always spark to animals. The cuter, the better. And, the more fantasy fulfillment, the more successful the film.

The French-Canadian production delivers both with a lion-sized portion of adorable, a wishful concept of a young human owner who has a cuddly relationship with two wild animals, and a strong message young viewers are likely to agree with.

It’s a formula the de Maistres crafted with their previous project. Mia and the White Lion follows a South African family who raise a lion from infancy and their preteen daughter becomes fiercely (and rightfully) protective. Both Mia and The Wolf and the Lion rely on documenting a loving relationship between a human and wild animals by recording their relationship over the course of years, starting from the animal’s first couple of months of life (helping to ensure the safety of the actor).

Once the idea was conceived, animal trainer Andrew Simpson, an entertainment industry veteran, began working with four wolf pups and two lion cubs at his Calgary animal sanctuary, and two made the final cut (lion Knox is “Dreamer,” wolf Twister is “Mozart”). In the film, the unlikely co-stars grow up together. Shooting took place over 15 months, so that the unlikely animal brotherhood depicted on screen is real – and incredibly sweet.

Watching the animals play is absolutely delightful. The two are so cute, their ears so fuzzy, paws as outsized as the love they clearly have for one another. Somehow, it’s a sensory experience that transcends the screen: When Alma snuggles with her charges, the viewer can almost feel what that might be like, including the soar of happiness.

The fantasy of having a friendly relationship with a wild animal isn’t limited to kids, but children’s imaginations allow this concept to latch on to their soul when they see another kid in that situation (think Dolphin Tale, Black Beauty, and Fly Away Home). Alma is the conduit, but it’s a 12-year-old who provides a connection. Rapha, played by Rhys Slack, is the son of a circus ringleader, and is thrilled to own a lion. His opinion changes when he witnesses how a lion is tamed. While the whip is put into use off camera, Rapha’s facial expressions tell the audience that the training methods are cruel and a traveling circus is no place for a wild beast. Kids are empowered with a sense of righteousness: We know better, why don’t adults?

For parents considering this title, be warned: Mozart and Dreamer face intense peril when the two get loose on city streets. Sensitive kids may have a tough time emotionally, but it is resolved with a happy ending.

The final moments let viewers know that animal actors Knox and Twister have a happy ending too. A captioned epilogue states they will live out the rest of their lives with Simpson on his reserve: safe, together, and treated well. What isn’t known is how the lions and wolves were obtained, and if their natural lives were disrupted to take part in the production.