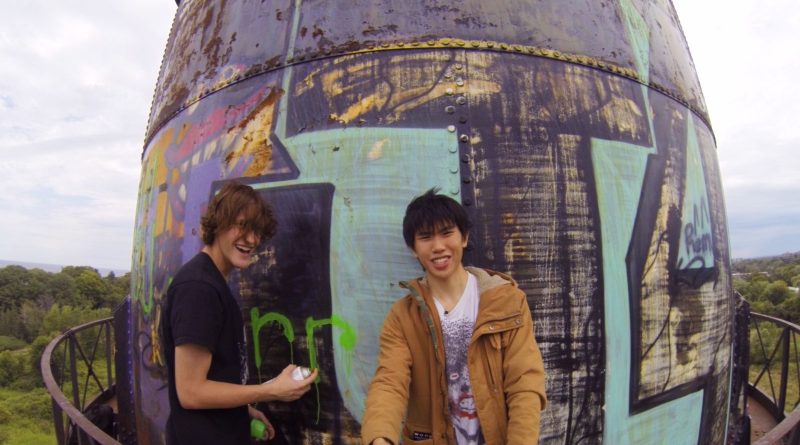 Sometimes a film comes along which genuinely leaves you not knowing what to say. For a critic, that is clearly less than ideal, but for someone who loves cinema in all its shapes and sizes, the experience almost verges on transcendent. Raw as fuck and hot as hell, Ethan Eng’s powerhouse feature debut Therapy Dogs, is at once, a war cry, a manifesto, and an absolute jewel for those of us who love the energy and intensity of true indie filmmaking.

Directed by 20-year-old Ethan Eng and starring himself and co-writer Justin Morrice, the film follows two best friends in the final year of high school who have told their school peers that they are making a video that ostensibly has something vaguely to be with the yearbook. In fact, what they are really doing is making a film that seeks to show “the truth about high school”.

That’s it. And, on the surface, what results from this premise could surely be expected to be pedestrian enough. But what explodes on screen with an electricity that is all too rare is one of the most sincere, original and pure movies I have seen in a very, very long time. Consisting of a loosely woven tapestry of vignettes focused around the two central figures and those in their orbit, there’s an aggressively punk spirit here of cut-and-paste DIY collage as it tours house parties and haircuts, informal bare knuckle boxing matches and strip clubs, high school corridors and the senior prom.

What welds these fragments together is nothing less than poetic, and as such it’s perhaps appropriate that it is not easy to identify, let alone define. Again, I come back to this word “energy”; Therapy Dogs is a movie that veritably pulsates with life in every frame, the wild uncontained power of the kids themselves transferred to the screen itself. Energy is, in this sense, perhaps a key term when trying to get a handle on just what it is this film is doing; casually meandering from different kinds of film stock to things like Google maps, there’s a kinetic and often frenetic propulsion here that feels like it will never stop, until – as we know it will – it does.

If the experience of watching the bulk of the film itself was unexpected, where it lands emotionally is downright astonishing. Despite all its dynamism, this is at its heart something much heavier and slower than its surface aesthetics suggest; it is, instead, a deeply moving portrait of two young men trying to find their place in the world, with their relationship with each other lying at the core of it.

This is the film older filmmakers who have tried to truthfully represent the high school experience could only dream of making. I feel genuinely sorry for some of them if they ever see this, because while they work from memory, Eng and his team work from the reality of the now. But this is no flash in the pan home movie; Eng is an extraordinary filmmaker, and this is a powerhouse debut feature. Don’t take your eyes off this director.