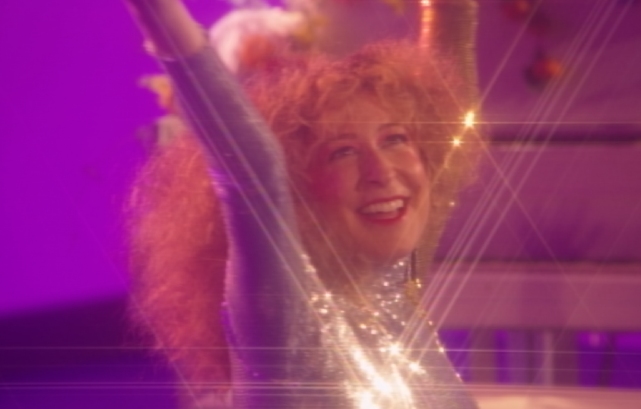 A thing of beauty and wonder, it’s about time the 1970s/1980s television prime time special was worshipped for the dazzling pop cultural phenomenon that it was. And – eschewing as she does nostalgia for nostalgia’s sake – there is no one better placed to tackle such a cinematic love letter than the fiercely original Amanda Kramer, a superstar in her own right for those familiar with her work. A key film in the current IFFR celebration of Kramer’s extraordinary filmography, her latest feature Give Me Pity! once again sees her pivot in a new direction away from earlier movies like Ladyworld and Paris Window. Like the latter in particular, however, television is a central part of Give Me Pity!, this time moving away from the object’s role in the home and moving inwards to focus on the action itself.

Give Me Pity! loyally mimics the once-ubiquitous TV prime time special format, here showcasing the many talents of the fictional Sissy St. Claire (Sophie von Haselberg). It’s all the song-and-dance routine glitzy razzle dazzle synonymous with such a format, but as Sissy’s earnest, to-camera monologues unfold throughout the movie, we see the cracks in her supposedly perfect, idealized facade begin to appear. Sissy, it seems, is a lot more complicated than the two-dimensional, one-size-fits-all model of female superstardom might have us otherwise believe. Adding to this, a strange, ominous masked man is taunting her, throwing Sissy’s performance even further off track.

Like Kramer’s other work, Give Me Pity! is by no means for everyone, an observation that surely the filmmaker herself would be the first to agree with. But if Kramer’s creative vision syncs with your own taste, Give Me Pity! is yet another spectacular accomplishment to add to Kramer’s already formidable filmography. Structured by the self-contained ‘numbers’ that the TV special format dictates, Kramer has noted John S. Boskovich’s 1990 Sandra Bernhard vehicle Without You I’m Nothing as a clear influence on Give Me Pity!, which comes as little surprise – both films (along with much of Kramer’s past work) share a fascination with women and the construction (and collapse) of gendered identities, relishing excess not merely as a formal methodology but a thematic weapon. One of the boldest filmmakers working today, with Give Me Pity! Kramer demonstrates she is only going from strength to strength.